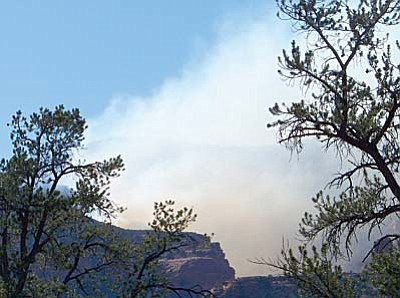 Smoke from the Fay Fire in the Secret Mountain Wilderness near Sedona adds to the haze across the Verde Valley. It was ignited by a fatal plane crash Sunday.<br /><br /><!-- 1upcrlf2 -->VVN/Jon Hutchinson

NORTHERN ARIZONA-- Smoke sinks in the cool of the night hours. So many in the Verde Valley woke Tuesday morning to the smell of smoke. There are numerous fires putting that smoke in the air around Northern Arizona. Visitors should be cautious of fire crews and equipment.

Fire managers continued burnout operations on four fires today, solidifying perimeters on of the Bar M and General fires, and moving fire across the landscape within the interiors of the Pothole and Willard fires.

Burnouts are a tactic used by crews to manage where and how the fire progresses, and by doing so in earnest over a shorter amount of time crews reduce the overall duration of heavy smoke - days of heavier smoke instead of weeks of moderate smoke.

The closest to the Verde Valley is the Fay fire burning four miles northwest of Sedona in the Fay Canyon of the Secret Mountain Wilderness. The fire is the result of a deadly airplane crash Sunday afternoon that killed four people. The fire produced several spot fires on top of the rim of Fay Canyon, which were attended to by a heli-tanker, and a hotshot crew will remain on site through the night to monitor the fire's status. It remains about 25-30 acres.

Willard Fire, Located South of Flagstaff between I-17 and Oak Creek Canyon, near the Willard Springs Interchange. There has been no growth at 1800 acres

The immediate area is closed for public safety, but no other road or trail closures are in place at this.

Bar M Fire, located 5 miles southwest of Mormon Lake near Forest Roads 240 and 91 is about 500 acres. The public should expect an increase of smoke in the Mormon Lake area.

Pothole Fire is a 1300 acre fire burning 22 miles north of Payson. Forest Road 142F, as well as the Tramway and Maxwell Trails leading into the West Clear Creek Wilderness are temporarily closed for public safety.

General Fire, Sized at 800+ acres is burning 15 miles northeast of Payson, off Forest Roads 300 and 95, south of FR 719. The immediate fire area is closed for public safety. The Fred Haught Trail and a portion of the Arizona Trail are temporarily rerouted.