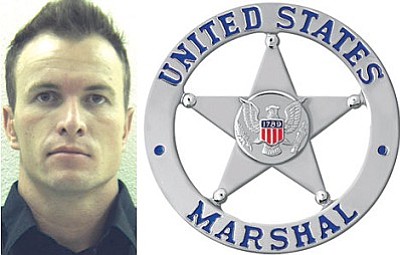 Wade Dickinson broke out of the county jail in Camp Verde on July 12 while awaiting transfer to a state prison. Now the U.S. Marshals Service has joined in the hunt.

CAMP VERDE - The U.S. Marshals have been called in to help with the hunt for fugitive Wade Dickinson.

More than a common figure on criminal justice movies and TV shows, the Marshals Service is the primary agency for fugitive operations and the law enforcement arm of the federal court system.

Wade Dickinson, 28, has been on the run since he broke out of the Yavapai County jail July 12.

Convicted of fraud, drugs and possession of firearms and sentenced to nearly 25 years in prison, Dickinson was in the recreation center of the jail, when he scaled a wall, broke through the overhead security fencing to reach the roof and escape the facility.

Dickinson was not reported missing until a neighboring business alerted the Sheriff's Office that an inmate was seen trying to steal a pickup truck. The owner told the SO that he saw the man running across SR 260 and east along Old Highway 279. That was the last time he was seen.

While Dickinson has friends and family in the Camp Verde area, the YCSO says he is a mixed martial arts trainer who, at 6 feet and 190 pounds, should not be approached.

The Sheriff's Office believes he has probably changed his appearance since his escape.

A $5,000 reward has been posted by Silent Witness for information leading to his arrest and the U.S. Marshals Service has increased that figure by another $2,000.