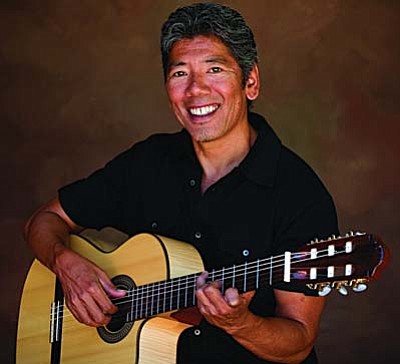 The Living Room Music Series features talented musicians and singer songwriters in the Sedona and Verde Valley area at the Center for Positive Living Sedona, Village of Oak Creek at 45 Castle Rock Road.

Patrick Ki's journey began in the island paradise of Hawaii, where he spent his youth amidst the gentle rhythms of the ocean and beautiful sounds of Hawaiian music. If you listen closely to his unique artistry, you can recognize the influence of the island "slack key" guitar. The enormous skill and musical sensitivity of this gifted guitarist was immediately evident and soon propelled him beyond the borders of his native homeland. In the pursuit of excellence, Patrick Ki traveled to both the East Coast and West Coast, becoming one of the first musicians to be honored with degrees from two of the nation's finest guitar schools.

The sheer scope of Patrick's achievements is outstanding. In addition to performing extensively across the country in concerts and music festivals, Ki has contributed to numerous film and television soundtracks.

The debut of Patrick Ki as a recording artist was met with unanimous acclaim by both music reviewers and listeners alike.

The soothing yet uplifting quality of his signature sound continues to touch the hearts of thousands, who encircle the globe from Mexico to Australia to China and Beyond!

At present, Patrick divides his time between Sedona and Hawaii, performing as the exclusive resident musician at Tlaquepaque"de Sedona This year, he toured with band Miller, Miller, Martin & Ki performing their "Baby Boomer Blast" show in fine art theatres and venues throughout Arizona.

Founder of the In the Living Room music series, Shondra Jepperson commented, "Patrick is an amazing player and he's a lot of fun too. People who have enjoyed his music will thoroughly enjoy getting to know him better in this music series."

Shondra continued, "As usual, our audience will have the opportunity to get up close and personal in this intimate venue and also ask Patrick questions during his concert so they can learn about this amazingly talented artist."

CPL Sedona's seating is limited to 40 comfortable chairs, with a stage platform and excellent sound system. These concerts are allowing for an intimate, up close and personal showcase with some of the finest performing artists in Sedona and the Verde Valley every Wednesday from 7-8:15 p.m.

Every Wednesday, the door opens at 6:30 p.m. with the concert starting promptly at 7 p.m. Admission is $10 cash only and because seating is limited it is highly recommended to arrive early since tickets are available only at the door the night of the concerts.

The line up of talented artists continues during the summer months.

Next Wednesday the Living Room presents world reknowned drummer South African Master Drummer, Recording Artist, Story Teller and Cultural Ambassador, Baba Vusi Shibambo joined by talented Arizona drummer Connie Avery. They are currently teaching drum classes on Monday evenings at the Center for Positive Living and this will give everyone the opportunity to really see them in action. There will even be drums on hand for audience members to join in the drumming fun toward the end of their concert.

Mark your calendars as June's schedule of Wednesday evening concerts will feature saxophone player Chris Counelis on June 18 and singer-entertainer Vismaya on June 25.