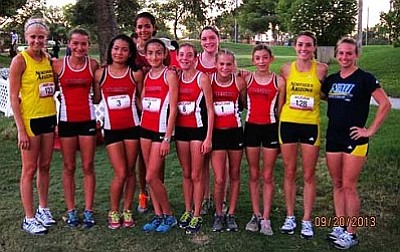 The Aftershock runners take a picture after a 2013 cross country meet with members of the NAU team. Photo courtesy of Aftershock

"It was really hot," said Penny Fenn. "I guess it was 100 degrees out and that turned into 110 degrees on the track, which you could imagine how hot that would be. Horrible conditions."

Coming from Cottonwood, the heat caught the runners off guard. When it was time to begin the races, the track was about 10 degrees hotter than the field, which sapped the runners.

"The heat was oppressive," said Aftershock head coach Micah Swenson. "By 8:30 a.m., temperatures were already hovering near triple digits with the track temperature even hotter."

"I'm happy because last year I got state ... and I was happy because I could do it again," Arellano said. "It feels good although this year there wasn't that much competition. Last year, when I was in a different age group there was a lot more competition."

"For me, we tapered [our workouts]," D'Angelo said. "We kind of shut down, well not really shut down but let our legs rest a little for LA (the Jets Invitational). Once we got back into running, without resting, I think it took a little toll on all our legs."

Junior Penny Fenn was searching for another USATF state championship, this time in the 2,000-meter steeplechase. It is an event that Fenn has been working on for a while and her goal was to win gold and break the state record (7:50.04). Unfortunately Fenn ran into 2013 champion Megan Reniewicki from Arcadia High School. Reniewicki ran the obstacle course in 7:57.41 and Fenn finished behind her, 8:20.89.

Next up for Aftershock is another trip to the sweltering Valley for the USATF Junior Olympics State Championships, June 14-15. As the days progress farther into the summer and the temperature goes up, the Aftershock runners are doing what they can to get used to the heat.

"Train like this (D'Angelo points to his two layers of long sleeves and sweat pants)," D'Angelo said. "Train with a bunch of clothes on, try and get used to the heat. Stay in the shade as much as we can, do the simple things."