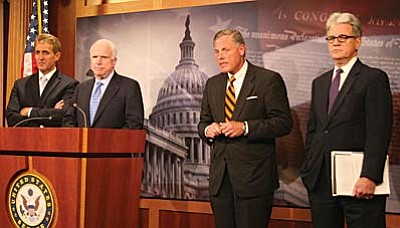 The bill introduced by Republican Sens. Jeff Flake and John McCain of Arizona, Richard Burr of North Carolina and Tom Coburn of Oklahoma, from left, comes as serious problems at the VA have forced the resignation of former Secretary Eric Shinseki. (Cronkite News Service photo by Miranda Rivers)

WASHINGTON - Faced with a scandal-plagued Department of Veterans Affairs, Arizona's senators joined other lawmakers Tuesday to back a bill that would give vets flexibility to choose medical care outside the troubled agency.

The Veterans Choice Act also calls for greater transparency and accountability within the VA, and would give the secretary more authority to fire department executives if they were not doing their jobs.

"I don't know of an issue more serious than this to the American people, as to how we treat those who have been willing to go out and sacrifice on behalf of our nation," said Sen. John McCain, R-Ariz.

He was joined by fellow Arizona Republican Sen. Jeff Flake and by Sens. Richard Burr, R-N.C., and Tom Coburn, R-Okla., four of the eight GOP sponsors of the bill.

It came the same day that Democrats introduced a similar bill, unveiled on the Senate floor by Sen. Bernie Sanders, I-Vt., the chairman of the Senate Committee on Veterans Affairs. The Restoring Veterans' Trust Act aims to reduce wait times for veterans seeking health care, ensure accountability for VA officials and, long term, allow hiring of more doctors and nurses.

The dueling bills come in the wake of recent reports that show a troubled, problematic health care system for vets.

Problems were first reported at the Phoenix VA, where reports said some veterans may have died while waiting for care, as agency employees worked to make it look like waiting times were better than they actually were. An inspector general's audit found 1,700 veterans who were awaiting primary care appointments in Phoenix but were not on any waiting list.

The investigation of the Phoenix facility has since become a nationwide probe, with a preliminary inspector general's report last week calling the problems systemic.

The furor led to the resignation Friday of VA Secretary Eric Shinseki, who said his presence would be an unneeded distraction to fixing the problems. Before he resigned, however, he canceled bonuses at the agency, began the process to fire top Phoenix executives and pledged the agency would contact all 1,700 of the unaccounted-for Phoenix vets.

Flake asked people Tuesday to try to imagine themselves as veterans in Arizona waiting 115 days, on average, to receive health care.

"If this legislation passes that will no longer be the case," said Flake. "Veterans will be guaranteed wait time as long as it should be."

One key to the bill is giving vets flexibility to choose care, supporters said.

"I have always believed that veterans could choose and should choose," McCain said. If veterans have "choice cards," McCain said they could take that and present it to their health care provider.

McCain said the bill would let veterans who cannot schedule an appointment or who live too far from a VA facility turn to Medicare or Tricare for coverage.

McCain said that unlike Sanders' bill, the GOP proposal "addresses the root causes of the current VA scandal and empowers veterans with greater flexibility to get the quality medical care that he or she deserves."

He said he has been in discussion with a number of Democrats who are interested in working with Republicans to pass legislation that will benefit veterans.

"We are eager to sit down with our Democrat colleagues," said McCain. "I believe we could get a Veterans Choice Act through this Congress in a week."

Dave Hampton, spokesman for the Arizona Department of Veterans' Services, said the crisis surrounding the VA may finally get Congress to act.

"The VA has had problems for many, many years," Hampton said. "It looks like this current crisis at the VA health care is going to actually result in addressing the problems that exist and that is a good thing for veterans."