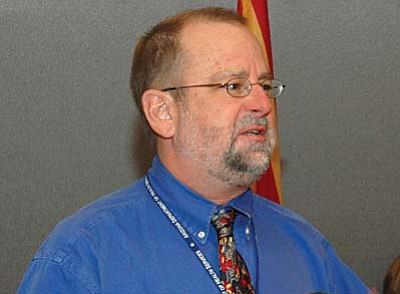 PHOENIX -- State Health Director Will Humble acted illegally in denying access to medical marijuana to people -- many of them former soldiers -- suffering from post-traumatic stress disorder, an administrative law judge has ruled.

Judge Thomas Shedden said Humble relied solely on the lack of scientific "peer-reviewed' studies in determining that PTSD should not be added to the list of conditions for which marijuana could be made available. But the judge said the health chief should also have considered the testimony of doctors and nurses who said the drug has helped their patients.

Humble said Friday he is studying the ruling but has not decided whether he will follow it. Under state law, Shedden's decision is merely a recommendation and Humble has until July 9 to decide whether to reject it.

Attorney Kenneth Sobel, representing the Arizona Cannabis Nurses Association which brought the claim, said Friday if that happens he will ask a superior judge to intercede and overrule Humble.

"Veterans desperately need this medicine,' he said, citing figures showing 22 former soldiers kill themselves every day, many of them suffering from PTSD.

The 2010 voter-approved Arizona Medical Marijuana Act allows the use of the drug by patients suffering from a list of several specified medical conditions. These range from glaucoma and AIDS to any chronic or debilitating condition that leads to severe and chronic plan.

So far close to 50,000 people have qualified under the existing list of conditions to purchase up to 2 1/2 ounces of marijuana every two weeks.

But the law also requires Humble to consider requests for expanding the list of conditions for which marijuana can be recommended.

Proponents of adding PTSD to that list tried in 2012 and again last year. That led Humble to contract with the College of Public Health at the University of Arizona to review peer-reviewed studies to determine whether there is any basis for that addition.

That report found "observational studies of varying quality,' with the conclusion that "the totality of this evidence should be considered very low quality with a high degree of uncertainty.' Based on that, Humble decided he could not make marijuana available for PTSD.

But Shedden said he reads the health department's own rules to say that decision should not be based solely on scientific studies.

He said the rules also require consideration of other evidence that marijuana will treat a medical condition or at least its symptoms. And Shedden said there was "substantial evidence' that the drug alleviates the symptoms of PTSD -- even if that evidence came from doctors and patients citing their own experiences.

For example, he cited testimony by Dr. Richard Strand who said his own review of medical literature shows that traditional drugs are not effective for everyone suffering from PTSD. Strand said there are side effects.

Shedden also considered the testimony of Ricardo Pereyda who said the medical marijuana he is able to get for his chronic pain has helped him deal with PTSD following his Army service in Iraq as a military policeman.

"There's plenty of anecdotal evidence,' Humble said Friday. "At the hearings that we had, one family after the next came up and personally testified that they believed that marijuana provided relief for their PTSD.'

And Humble said he considered that.

"But throughout my entire career I've really focused on using scientific evidence really as the cornerstone of good, effective decision making when it comes to public policy,' he said. And that evidence is not there.

Sobel, however, said relying solely on scientific studies to expand who gets medical marijuana is unreasonable simply because there are none -- at least in part because the federal government has thrown roadblocks in the path of researchers. In fact, he doubted that anyone could find the kind of study that Humble wants now for PTSD for any of the other conditions for which marijuana already can be recommended by doctors.

Beyond that, Sobel said the rules themselves make clear that marijuana can be considered appropriate if it provides a "palliative benefit.' And that's where anecdotal evidence comes in.

"Good doctors will tell you that probably the best way to find out if it makes you feel better is to ask the patient,' he said.

Anyway, Sobel said, even if there are no scientific studies on marijuana being beneficial, he said there also are no studies showing it is harmful.

PHOENIX -- The state's top health official is weighing new regulations to ensure that users of medical marijuana snacks and drinks know when to stop.

Will Humble said he may require dispensaries to certify that an employee has discussed with the customer the effects of the product being bought. And Humble, the state's health director, said he exploring the use of what might be called "secret shoppers' to ensure that customers are being told what they need to know to remain safe.

Humble said Arizona laws and regulations already require dispensary "agents' to talk with customers. But he conceded it's likely that medical marijuana buyers have been pretty much left on their own to discover how much they needed to inhale, whether smoking or "vaping" it, to get the effect they wanted.

"It goes straight from your lungs into your bloodstream, right to your brain,' Humble said. "So it's easier to self-regulate in that regard."

Humble said edible forms of medical marijuana are the best from a health perspective, as they don't require inhaling all the fumes.

"But they're much harder to regulate the dose," he said. "So you have a bigger opportunity with edibles to overdose on the medical marijuana because you continue to eat either a brownie that was more potent than you realized or more brownies than you probably should have."

And Humble said by the time someone feels the effects of the chemicals, it's too late to do anything about it "because it's already in your blood.'

This really wasn't much of an issue in Arizona before a March court ruling involving a 5-year-old Mesa boy, a medical marijuana patient, whose parents said he needed a tincture made from an extract.

Maricopa County Attorney Bill Montgomery had argued the law allows use only of the plant itself and requires any food product to actually have pieces of the plant, a restriction that limited the kinds of edibles produced. But the judge said Montgomery was off base and gave the go-ahead for extracts -- and all the products that could be made from these concentrates.

There are existing requirements that products list the amount of marijuana it took to produce a product. But Humble said they are probably not helpful in preventing an overdose.

The reason is that nothing in Arizona law requires that products be tested -- and labeled -- for the level of active ingredients. That includes not only the psychoactive ingredient tetrahydrocannabinol that gets people "high' but also cannabidiol, another compound in marijuana which has medical effects but without the feeling of being "stoned."

And that, he said, is why the dispensary agents need to be chatting with their customers, particularly those picking up edibles.

"They're supposed to talk to them about what the marijuana does," he said of existing rules. And it even requires discussion of "self-management,' with patients urged to keep track of their experiences in a notebook "so they can do a better job of self-regulation at home."

But Humble said his staffers are supposed to identify themselves when they inspect a dispensary. So there's no real way to tell what happens at the counter on a day-to-day basis.

That's where the possibility of a "secret shopper' comes in. So Humble is reviewing the law to see if he can do that now or would need a change in the voter-approved law -- one that could be made by the Legislature only on a three-fourths vote of both the House and Senate.

At this point, it does not appear the dealers will raise objections to expanded regulations. Andrew Myers, executive director of the Arizona Dispensaries Association, said proponents of medical marijuana have a selfish reason to want to prevent patients from overdosing.

"The biggest risk of people having too much cannabis is really that they're not going to use it again," he said. And Myers said that, in many cases, patients are not "effectively educated."

Myers said he also sees no problem with undercover inspections "as long as it's a fair and equitable system," one in which the dispensary operators have a voice in crafting.

Attorney Ryan Hurley, who represents some dispensary owners, said he concurs with Humble's concern that there may be a need for actual testing of products.

"There's no way to assure that the dose in one edible is going to be consistent with the dose in the same brand in the same type of product," he said.
Contact
Sign up for our e-News Alerts
Most Read
7 days
30 days