A look at 3 options for managing Fossil Creek 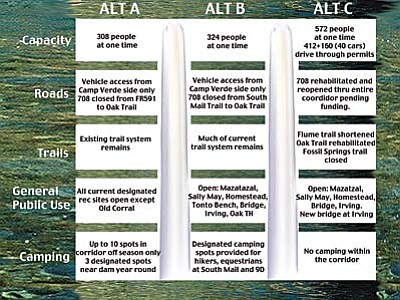 CAMP VERDE - It is an Arizona treasure and no longer a best-kept secret. That is the impetus behind the ongoing formation of a management plan for Fossil Creek.

Forest Service officials took feedback from many meetings with the public and stakeholders to form options for supervising the favorite outdoor area. They have now narrowed it all down to three alternatives that they have taken back to the stakeholders to check for "red flags," according to Red Rock District Ranger Nicole Branton.

"Now we can start analysis of the alternatives, and then we'll go out with it again," she said.

The three options being presented have several actions in common. Among many other items, that includes a permit and fee system (possibly operated by a third-party concessionaire), reduction in capacity, prohibiting roadside parking, restoration of some wilderness areas, safety improvements on Forest Road 502 and "welcome stations" on the east side at the Fossil Springs Trailhead and on the west side at a location that varies according to each plan.

With Fossil Creek and its recreation area running the border between them, Coconino and Tonto national forests are working together on the project, which began in 2009. That's when Congress designated Fossil Creek as a Wild & Scenic River.

"We are charged by that act not to do anything that would degrade the ecological values," Branton said.

That means laying out the best course of action to preserve Fossil Springs while allowing public access. How open or limited that access is in the future is the dividing point among the three alternatives.

Alternative A is most similar to current management of the area. The existing trail system would remain, with a new interpretive trail at the west welcome center that is planned at the Good Enough turnout and bring Oak Trail into the system. That plan allows vehicular access to Homestead only for tribal members and opens all currently designated recreation sites except Old Coral.

For camping, Alt A will have up to 10 spots in the corridor during off-season only and three designated spots near the historic dam year round. Bridge parking would be created at River Bend, and three campsites and toilets would be installed at Fossil Springs. Alternative A limits capacity to 308 people.

Alternative B, called "non-motorized experience," would gate Forest Road 502 and require a non-fee permit for access to Childs. Like Alternative A, there would be motor vehicle access to the area from the Camp Verde side only. On the west side, the welcome station would be west of the 708/502 junction with a new interpretive trail. There would also be bike racks and hitching posts installed at various areas.

The plan creates new handicap-accessible trails, rename some trails and decommission other trails. Most of the current trail system would remain. It would close recreation sites at Old Corral, Purple Mountain and Fossil Springs. There would be designated camping spots for hikers and equestrians at South Mail Trailhead and 9D Trailhead. Overall capacity is limited to 324 people.

Unlike the other options, Alternative C would rehabilitate Forest Road 708 and reopen the entire corridor to the public. It would also involve constructing a new bridge for access to a recreation development at the historic Irving power plant. Branton said the roadwork for Alternative C alone would cost $10 million.

Whichever plan is chosen, the anticipated fee and permit program will help pay for the management of the area, Branton said. Start-up costs like any necessary construction, however, would require considerably more funding.

Like everyone else, the Forest Service has to go through the National Environmental Policy Act (NEPA) process to determine the environmental impact of all work that will be done and make that impact public. That includes water quality, threatened species and like.

"It's very comprehensive," Branton said. "We have been very careful to be very inclusive of all stakeholders without losing sight of general public interest. And that takes time."

While the Coconino and Tonto work together (the final meeting with the stakeholders for this round is June 16 in Payson), Coconino staff members have mainly staffed the analyses being done as a result of these meetings. Those analyses will determine what is ultimately presented to the general public as the plan for Fossil Springs.

However well managed the Wild & Scenic Area becomes under the Comprehensive River Management Plan, it probably will not change the cycle of seasonal closures that residents have grown accustomed to, Branton said. Fossil Creek is currently closed because of the high risk of fire, a situation that will almost always exist at this time of year in Arizona.