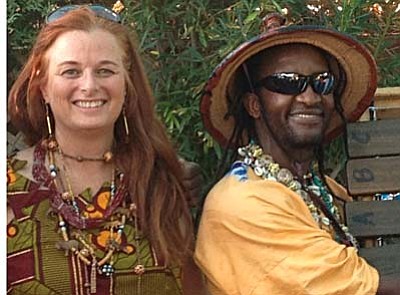 Baba Vusi Shibambo will be joined by talented Arizona drummer Connie Avery June 11 at the Center for Positive Living in the Village of Oak Creek at 45 Castle Rock Road.

The sound and rhythm of African drumming is a primal event. It is a shared expression that many ethno-musicologists recount as being at the center of our collective consciousness, as the branches of the human tree trace back to the African continent.

Baba Vusi Shibambo is a multi-instrumentalist, playing percussion, the African Djembe, udu, conga, Azhiko, and nagara drums, marimba, mbira (kalimba or finger piano), as well as the Bushman's haunting berimbau. Born in South Africa, Bab is one of the Shangaan people.

Shimbambo translates into English as "guardian of the skins." Keepers of the Rhythms and the Royal Shimbambo family ancestors were esteemed for their vital position in the community as caretakers of the tribe's animal skins for clothing and drums. Shimbambo dreamed of continuing in the family drum tradition, which he now passes on to his son Manqhoba, "The Victor."

His goal of preserving the music for present and future generations has culminated in his new CD African Skies on Skin, which commemorates the 10th anniversary of the first democratic elections in South Africa and celebrates the children of South Africa who stood up against the apartheid regime in 1976.

Connie Avery is an outstanding drummer who joins Shimbabo for a concert that everyone will enjoy thoroughly. Vusi and Connie's concert will feature traditional South African rhythms, songs and stories from the Motherland as well as a performance with audience participation on percussion instruments towards the end of the night.

Founder of the In the Living Room music series, Shondra Jepperson commented, "Vusi and Connie are a must see. Whether you've already seen them in concert or not, they always deliver a fabulous one of a kind performance great for all ages."

Shondra continued, "Another thing that's really cool is, Vusi and Connie offer on-going drum classes every Monday night at the Center for Positive Living Sedona so anyone out there who loves drumming will love this concert and have the opportunity to sign up for their Monday evening classes."

CPL Sedona's seating is limited to 40 comfortable chairs, with a stage platform and excellent sound system. These concerts are allowing for an intimate, up close and personal showcase with some of the finest performing artists in Sedona and the Verde Valley every Wednesday from 7 to 8:15 p.m., with the door opening at 6:30 p.m.

Admission is $10 cash only and because seating is limited it is highly recommended to arrive early since tickets are available only at the door the night of the concerts.

Next Wednesday, June18th the Living Room presents Swedish Singer Songwriter, Entertainer Vismaya. Be sure to catch Vismaya in concert and mark your calendars for July as it features guitarist singer-songwriter Jack Wilden on July 2nd, popular Flagstaff Classical guitarist Brian David on the 9th, Singer Songwriter Guitarist Celia Farran on the 16th, Recording Artist Singer Songwriter Adam Smith on the 23rd and finishing up july's schedule with one of Sedona's youngest Singer Songwriters, Sophia Angeles on July 30th.