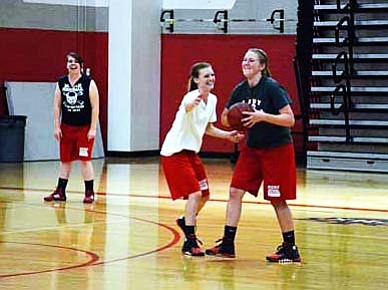 Kylie Streck guards Sharon Rehborg and has a laugh during practice. VVN/Travis Guy

With the team beginning June ball workouts this week officially, the main focus of the month long season is teaching the young team defense.

"Defense," said head coach Dave Moncibaez. "We have to get tough and better on defense. I always like to start it out defense first, before we implement any kind of offense, we have to know the basic fundamentals of defense."

After a season with nearly the entire starting lineup composed of seniors, Mocibaez, his father Art and brother Steve are lacking in the experience department. As of today Kylie Streck is the lone student-athlete on the team that is entering her final year as a Marauder. After Streck there are a handful of juniors but the remaining participants of June ball are all underclassmen. While the Marauders may not have the veteran experience other teams have, the promising thing about practices is that attendance is at an all time high.

It is always hard to get ideal numbers for summer ball; between vacations and work the student-athletes can be busy (and that does not take into account other sports they may be playing during the summer). But with nearly 20 girls regularly showing up to practices, the coaches are enthusiastic about Marauders basketball.

Another encouraging sign for Mingus girls' basketball is that the older players on the team have happily stepped into leadership roles. From pairing up with incoming freshmen and sophomores to teach them things to running warm-ups and teaching drills, the upperclassmen that make up the team are doing everything they can to help their future teammates progress.

"Right now, yes, they've taken up the leadership roles by running some of the drills and familiarizing the girls with the drills," Moncibaez said. "They're really taking pride working out with the younger girls to get them better and learning the stuff as quickly as possible. I have them partnering up with the younger classmen to do that so they're on the same page."

Moncibaez had his first opportunity to see his team in action this past weekend when they traveled to Prescott High School. There the Marauders faced a Prescott team that becomes a club team when season is not in session (meaning year-round basketball) and they squared off with Camp Verde, a team that is returning seven players that are familiar with how each other play.

"The main thing we wanted to do over the weekend was figure out what we need to work on the most," Streck said. "It wasn't about if we won or lost, it was what we did wrong and what we did right."

Going into the games, the coaching staff only cared about learning, growing and progressing as a team. There were things Moncibaez saw that will need to be fixed, but also positive things that the girls were doing well, like having their moments against Camp Verde with the man-to-man coverage.

One thing that surprised Streck was the amount of communication among her teammates. But there were also things to improve. Streck said the Marauders passing needs to get better. They committed too many turnovers because of girls passing the ball at their teammates feet. Junior Sharon Rehborg said the team needs to move better when they do not have the ball and learn to play better as a team, all things that come with inexperience, but are improved through summer workouts.

"I think overall, moving without the ball is one thing we really need to work on and just being receptive to our teammates and figuring out what everyone is going to do," Rehborg said.

With one week down, Moncibaez and his coaches, his dad and brother, are happy about the excitement shown from the new and returning basketball players. They are still laying down the foundation for a solid, successful program in the future, but they see the future in the young girls that are showing up to practice.

"The best turnout," Moncibaez said. "I would say a solid 17-18 players playing one day a week at Coconino, very pleased with that. I see these girls wanting to learn the game, playing together and this is how you build chemistry, by them showing up and learning."

Marauders' fans will have a chance to support their team when the girls host an enchilada dinner at Randalls Restaurant. The fundraiser will be on June 17, from 5 to 8 p.m. with all proceeds going towards the girls basketball program.