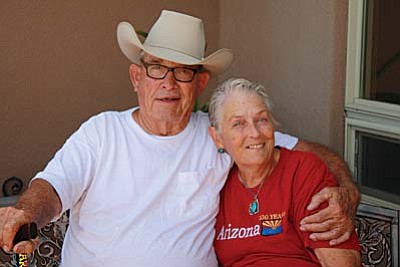 Cork (Edwin) and Bobbi (Barbara) Davis will celebrate their 60th wedding anniversary June 26th. The two met in Salome, Ariz., and were married in Prescott in 1954 and spent their honeymoon at the Apache Lodge in Prescott. They bought their first home in Phoenix and began raising their three children, later moving to Flagstaff, Albuquerque, again to Phoenix before taking over the P7- Ranch in Wagoner, Aris. Over the years their family has grown, blessing them with, 9 nieces and nephews, 9 grandchildren, 11 great grandchildren and countless close friends. Cork and Bobbi are both multi-generation Arizona Natives and currently live on the family's cattle ranch in Wagoner.