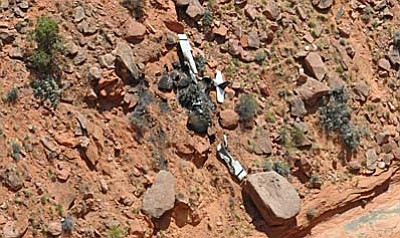 Coconino County, AZ- A missing aircraft crashed in a remote area of the Navajo Indian Reservation in the northeast part of Coconino County. Coconino County Sheriff's Search and Rescue and Detectives along with Arizona Department of Public Safety Ranger Helicopter responded to the scene and confirmed two people were deceased.

The Air Force Rescue Coordination Center (AFRCC) had been investigating the report of an overdue aircraft with two males aboard destined for South Carolina. The AFRCC found the aircraft had departed Las Vegas, NV sometime Friday June 20, 2014, landed in Page, AZ and then departed Page at 1:30 pm Arizona time. The pilot had not filed a flight plan. The AFRCC found the last cell phone contact with the pilot's phone was off a tower at Navajo Mountain shortly after the take- off from Page. The AFRCC then contact the Civil Air Patrol Wings from several states, who launched a multi-state search Sunday morning June 21, 2014.

Four Civil Air Patrol (CAP) Wings were involved in the search across four states, including Arizona, Colorado, New Mexico, and Utah. A ground search team was deployed to Tuba City from Arizona, and a Communications Team from Colorado was deployed to Page. At around 1:40 pm Arizona time, the Arizona Wing of the CAP located from the air the wreckage of a plane in a canyon. Wreckage matching the description of the missing aircraft was at the bottom of a remote desert area called Peach Canyon.

Sheriff's detectives were transported to the scene by the Arizona Department of Public Safety Ranger Helicopter based out of Flagstaff. Due to the remote nature of the canyon, access to the wreckage could only be made by helicopter. The bodies of the deceased were removed and transported to the medical examiner's office in Flagstaff.

While positive identification of the victims will be made by the Coconino County Medical Examiner's Office, the pilot is believed to be 47 year old Charles Trotter of Liberty, SC and the passenger is believed to be 15 year old Dakota Jacks from Pickens, SC. Dakota is reported to be a friend of the pilot's family. The cause of the crash will be investigated by the National Transportation Safety Board.