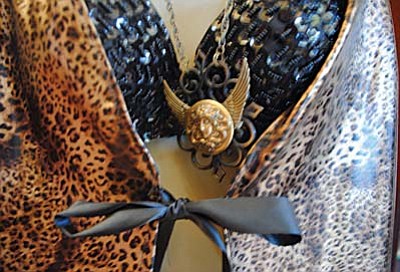 COTTONWOOD - A vintage shop with a flair of sparkle, the newly dubbed Pink Rain in Old Town Cottonwood is seeing some small changes under new owner Christel Radke.

After a couple years as the manager at Cindi Bee Boutique, Radke decided to purchase the business three months ago.

"The opportunity came up to buy the boutique, and I jumped at it because I love the people," she said.

Radke moved to the states 11 years ago, eventually following her job to Sedona. After spending a couple of years living in Guam, she said she was getting a little island fever and decided to move back.

"Old Town has undergone this renaissance," she said. "When I left to go to Guam, there was hardly anything here. I couldn't believe my eyes when I got back, and decided definitely to stay."

She lives in Cornville and drives into Old Town to work at the shop seven days a week. Her Pink Rain label comes from a book Radke wrote, and she is sewing a clothing line to sell in the store with the same title.

About a month before purchasing the shop, Radke said she and the former owner organized a burlesque show at Main Stage that sold out. This may happen again next year, as she continues phasing in her own flair.

A romantic section, with laces and velvets, is being added to the shop while corsets and bustiers remain part of the vintage charm.

"I'm in the process of somewhat rearranging the store with regard to merchandise, phasing out some things that were there before and injecting my taste," she said.

The sole employee for now, Radke said she hopes to stay in the area and hire more people. She's stayed opened to 7 p.m. a few times, trying to encourage businesses and members of the Old Town Association to take some risk by staying open a couple of hours later in the evening to catch the dinner crowd.

"At least once or twice a week, stay open to entice them," she said. "Somebody has to start. If I can convince a couple more stores, it'll be nice and maybe becomes a habit."