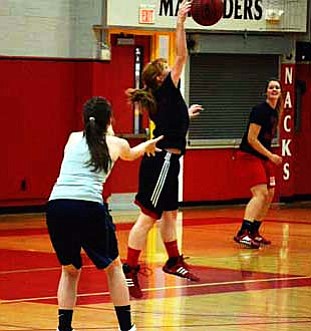 On the other side of the coin, the Marauders are building their 2014-15 team. With the exodus that is graduation claiming a number of Mingus' starters, head coach Dave Moncibaez has been given a group of girls that lack varsity experience.

"Overall yeah, I think the girls got a lot from it." Moncibaez said. "They got to see a higher level of game play and most of these girls have never seen that level. For them to experience it first hand, they know where they need to be and how hard they need to work to get there."

That was one of the biggest benefits of the Point Loma camp and tournament for the Marauders, getting the youth on the team the chance to play in varsity games and get exposure to the different level of play.

"They realize they can't just play defense," Moncibaez said. "They've got to play tough otherwise the competitions going to make them look bad if they don't play at that upper level."

Aside from getting the young Marauders varsity exposure, the Summer Slam offered Mingus Union the opportunity to build on what has been laid out over the month of June.

The girls have been focusing on defense all summer and with the conclusion of June ball, the defensive building blocks Moncibaez, his brother Steve and father Art have been laying, began to show. It was not perfect, but with such a young group, it was a start. There are still things to work on, like blocking the passing lanes after running a trap, but the Marauders' defense showed "huge improvement."

"We were doing fantastic on the traps but we were bailing out on the passing lane after the trap so they were able to get the ball out of the trap," Moncibaez said. "But that was one step forward. That was a huge improvement there."

After Point Loma, the coaches were happy with the progress their team had made and decided to begin working on offensive plays. The trip to Southern California was great for Mingus. It showed the coaches the progress the girls have made since the beginning of June ball, learned and grown together to strengthen the team for the looming season.

"It was a good experience," Moncibaez said. "I think they learned a lot and grew a lot. I think the defense is coming around."