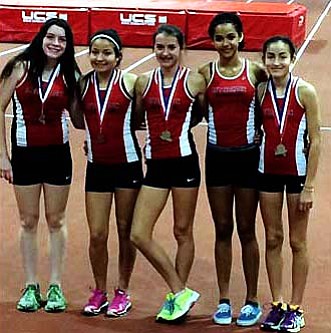 The Last Chance Meet is an opportunity for junior college athletes to have one final chance to qualify for nationals. For Aftershock, it was one final indoor meet before the outdoor season begins, unless sophomore Chris D'Angelo runs at the USATF Nationals in Maryland.

"This meet was one of the key measuring stick meets for our season," said Aftershock head coach Micah Swenson. "Our training suggested that we should show some solid growth and we did. We're in a good place right now."

In what is become a weekly tradition, the Aftershock runners multiple top finishes and PR's despite having only 14 entries.

In her final event of the Aftershock indoor season, sophomore Megan Goettl notched a win in the 1,500-meter race. Goettl was a few ticks away from breaking the five-minute barrier when she crossed the finish line in 5:00.22, a new season's best for her. Her teammate, fellow sophomore Penny Fenn, was right behind her, coming in second four seconds later, 5:04.42, also a season's best.

After the girls, D'Angelo stepped up to the starting line for his 1,500-meter race. In his second meet of the season the freshman out-kicked his opposition and won his race with a season's best 4:36.75.

Switching to the mid-distances, sophomore Karen Arellano tallied two PR's on the day. Her first was in the 600-meter race. The elder Arellano sister shaved a second-and-a-half off her old PR to finish second with a time of 1:47.45.

Freshman sprinter Brianna Epperson PRed in her 200-meter race with a time of 29.30. This was her final race for Aftershock this track season, as she will be joining Goettl on the Mingus Union track and field team for the outdoor track season.

"From a time improvement perspective, the 1000m was our most successful event of the day," Swenson said.

"I've been really impressed with Penny over the last couple of weeks," Swenson said. "Her training and racing have been really strong. I'm excited to see what the rest of the season holds for her."

Aftershock ended the day with the 3,000-meter race. Both D'Angelo and Allyson Arellano took home gold in their 1.75 mile run. D'Angelo scored his second first-place finish of the day with a time of 9:45.01. Despite D'Angelo's young age, the freshman has carried out his game plans "as close to perfection" as possible for a runner in consecutive meets.

"Right now, Chris is running as smart as any runner I've ever coached," Swenson said. "He's executed 2 race plans as close to perfection as you could possibly be at back-to-back meets."

The younger Arellano sister has been running lights out this indoor season and continued her superb running at the Last Chance Meet. Allyson added her fifth first place finish in a row and ninth overall in 2014 when she raced her best time of the season. The freshman ran her 3,000-meter race in 10:44.24.

"Our collective fitness is much closer to where it needs to be for us to get in the quality of workouts we're looking for," Swenson said. "We're starting the more analytical portions of our training now where the numbers start to matter more. This is a fun part of the season as a coach because communication becomes more intellectual and specific."

Now the club transitions to outdoor track and field. They kicked things off yesterday (March 1) at Central Arizona College. One of the races Swenson was looking forward to was the 3,000-meter steeplechase. As Fenn continues to impress with her running acumen, she will be running in the steeplechase for the second time. The first was in 2013 at the Arizona State Junior Olympics. There Fenn finished second in the 2,000-meter steeplechase.

Following the kickoff to outdoor season, Swenson will be taking the Arellanos and Fenn to Occidental College in Los Angeles for the Distance Carnival on March 14.