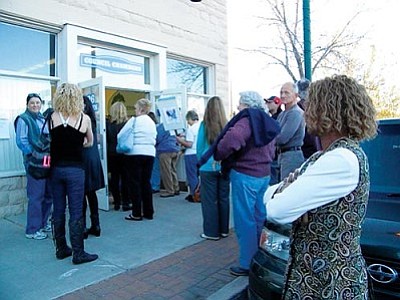 VVN/Jon Hutchinson<br> The overflow crowd for the Humane Society's presentation waits outside the Cottonwood Council Chambers.

COTTONWOOD -- A large crowd overflowed the Cottonwood Council Chambers Tuesday evening. Most were supporters of the Verde Valley Humane Society and on hand to show the strength of their numbers and support for VVHS Board President Grace Lahr.

Lahr and board members along with volunteers and a few paid employees have continued to run the shelter during the past two years. She said that by July of 2013 the shelter was nearly $10,000 in the black even though two years earlier it was $92,000 in debt.

Lahr said the city offered the shelter a space for its thrift store at $1 per year. Local veterinarians helped with their services, the Jerome Humane Society also donated services and community donations and grants increased.

Lahr said a private family foundation offered to match donations to construct the new shelter in 2009 that was half completed by spring of 2010 with $700,000 it provided. The foundation contributed another $50,000 toward completion of the entire building, No matching funds have yet been contributed.

Lahr said a professional needs to be hired; the board can no longer continue to run daily operations; Jerome Humane cannot continue to donate services; and the second half of the shelter needs to be completed to provide for isolations areas, grooming and medical stations. The shelter must also evolve an education program for the community.

In response, Mayor Diane Joens promised the Humane Society would be part of the upcoming budget discussions.