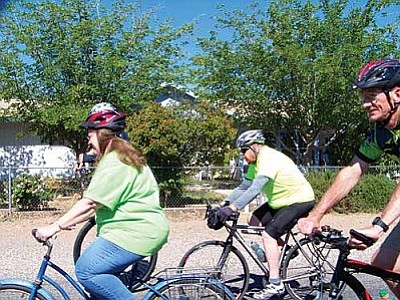 Cottonwood Mayor Diane Joens pedaled her single-speed Schwinn to lead a couple dozen cyclists in the Mayor's Ride Saturday morning to kick off a Bicycle Awareness Month in Cottonwood.

When the ride competed a small loop around the downtown area, the pack of cyclists greeted a drove of kids drawn to Garrison Park for a Bike Rodeo, a program that teaches bicycle safety, distributed bicycle helmets and taught bike care.

There will be an increasing number of bicycles on the road in the coming weeks. Bike to Work Week takes place May 12-16.

Then, nearly 1000 bicyclists will be on the road throughout the Verde Valley for the MS Ride the Vortex, based from the Cottonwood Kids Park. The event to raises money for Muscular Dystrophy research. Cottonwood Councilman Jesse Dowling and a team of 11 will be part of that event. Finally, a Ride of Silence May 23, will remember those lost on the road. Cottonwood is qualified as a Bicycle Friendly City.

Mayor and Council's Bike to Work Ride
Cottonwood Council declares May as Bike Month
Letter: City moves forward with safety-first policy
On the Road Again in Cottonwood
Letter: A big step in the right direction for Cottonwood