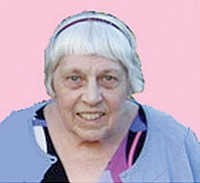 She graduated from Jackson High School and attended two years of secretarial college.  She worked as a secretary for Fields Department Store in Jackson, MI.  Later she married and became a homemaker and a mother to three girls.  Arlita returned to work later as a sales woman at Diamonds and Dillards stores in Metro Center in Phoenix.

Arlita's most proud accomplishment was being a terrific mother, grandmother and great-grandmother to her family.  Arlita participated in many school activities for her girls and various community service events, including being a Girl Scout Leader for many years.  She enjoyed sports, especially swimming and bowling and she was an avid golfer.  She loved going to the movies and savoring her favorite treat, Reese's Peanut Butter Cups. She was addicted to head bands, mani-pedi's, parties, chocolate ice cream, and wearing purple, which was her favorite color.

Arlita was preceded in death by her former husband, Robert Harold Campbell.  She is survived by her daughters, Bonnie (Vince) Delise of Phoenix, AZ, Sandra (William) O'Connell of Clinton, NC and Wanda (Henry) Wolf of Cottonwood, AZ; her brother, Jerrol (Nannette) Pfeiffle of Jackson, MI; four grandchildren and five (and one on the way) great-grandchildren.

A graveside service has been held at Sunland Memorial Park in Sun City, AZ.