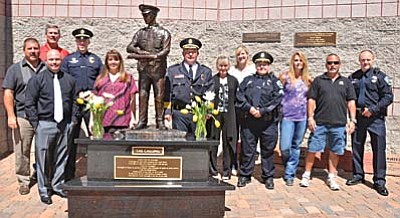 COTTONWOOD-- Cottonwood Police and their many friends and supporters unveiled the Law Enforcement Heroes Statue Friday.

"I had helped the police chief in Flagstaff do fundraising for a statue there and Chief Fanning knew about it and knew I was involved and wanted something similar here," said Iacovacci.

A committee was formed to create the image. The statue depicts an officer holding a flag. A flag is presented two times during an officer's life: when an officer retires and when he dies. So it commemorates those milestones for all officers.

Private and corporate donations contributed the approximately $70,000 cost of the creation and mounting of the statue in the pathway garden at the Cottonwood Police Station.

Fundraising has already begun to recognize with a statue the K-9 officers who have represented the city.