Former Marauders shine at next level 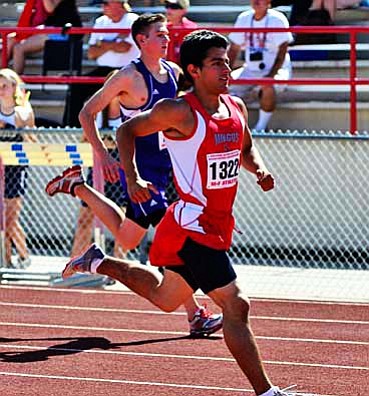 A week after the Marauders wrapped up a third first place and fourth place team finishes (girls and boys respectively) at the Division-III track and field state meet, a slew of former Marauders had their own stand-out performances on the track.

Up north at Northern Arizona University the Lumberjacks held the Big Sky Conference Championships. Former Marauders Tim Freriks, Lesli Kinkaid, Sarah Raber all performed and Freriks punched his ticket to Fayatville, Ark. for the NCAA regionals in the 10,000-meter. Freriks finished third with a time of 31:15.19. He also ran in the 5,000-meter run and finished in 15:43.82, which put him in eighth.

Raber, Freriks teammate at Mingus Union and in Flagstaff, competed in the steeplechase for the fourth time in her career. This was the first year she qualified for the Big Sky Championships and was happy with her finish, according to former coach, and current Mingus distance coach, Jim Bostwick. Raber finished 10th with a time of 11:48.89.

Both Raber and Freriks helped the Lumberjacks win team titles for the men and women.

Also in Flagstaff, but competing for the Southern Utah University Thunderbirds, Mingus record holder Lesli Kinkaid competed in the pole vault. Kinkaid holds the Marauders pole-vaulting record with a jump of 11 feet even. At the Big Sky Championships Kinkaid jumped 11 feet 10 inches, landing her in ninth.

Skylar Storie, part of the Marauders' first two state titles, earned All-American honors in the 10,000-meter run and 3,00-meter steeplechase. Storie ran the distance race in 39:29.88, good enough for fourth place and was her first All-American honor of the weekend. Her steeplechase race was her second fourth place finish of the weekend and Storie ran the course in 11:28.98.