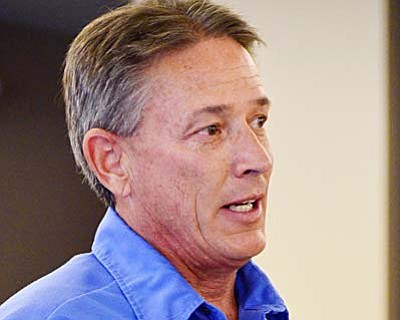 Supervisor Chip Davis: “To continue to pour money into something that has no return to Yavapai County is irresponsible."

COTTONWOOD - A majority of the Yavapai County Board of Supervisors members said Monday they are ready to dissolve the 15-year-old Yavapai County Water Advisory Committee in a year and contribute only half their dues this year.

Supervisor Chip Davis led the charge to get rid of the water group, continuing to insist it hasn't done anything while Water Advisory Committee Coordinator John Rasmussen listed its monitoring work, studies and contributions to K-12 education.

"To continue to pour money into something that has no return to Yavapai County is irresponsible," Davis said, adding he would prefer to spend it on something like a new office manager or moving on to another issue such as economic development. Davis is the only current supervisor who was involved in the creation of the committee 15 years ago to foster better communications between the Prescott area and Verde Valley.

Supervisors Davis, Rowle Simmons and Craig Brown all supported contributing only half of the county's $89,000 in dues next year, then dissolving the committee.

Thurman agreed but wanted to wait for opinions from all the municipal members of the water group.

"I think it plays a vital role," he said of the water group.

Several supervisors said it would be better for someone to just ask for money for specific water projects, but they didn't explain who would do that if the water group dissolves.

After using previous studies and on-the-ground monitoring to figure out how much water is available locally and where, the committee currently is wrapping up a study with the U.S. Bureau of Reclamation about possible ways to supplement the Verde River Basin's water supplies.

The first phase of the Central Yavapai Highlands Water Resource Management Study estimated that the region needs another 45,000 to 80,000 acre-feet of water supplies annually from new sources by 2050, since the county's population could triple to 600,000.

"That I believe is a pretty important piece of advice," Rasmussen said.

The draft study has narrowed a list of possible new water supplies down to eight potentially viable sources. They include groundwater outside the Prescott Active Management Area, conversion of relatively urban septic systems to regional water systems, recycled wastewater, capturing and storing unappropriated surface waters, rainwater harvesting, and piping river water from as far away as the Colorado.

Now the elected officials on the Water Advisory Committee need to decide whether they want to study any of those potential sources in more detail. That would include analyzing the potential environmental and legal issues surrounding the sources, as well as estimating the costs.

This third phase of the study would be the most costly, and committee members have said they would need to gather public support first.

Brown contended the Bureau of Rec report is finished.

"The question is, what are we going to do as a county body?" he said.

The Prescott region has been depleting its groundwater supplies for at least 15 years and is looking to the neighboring Big Chino aquifer as a relatively short-term solution. Studies the Water Advisory Committee commissioned from the U.S. Geological Survey conclude that at least 80 percent of the Upper Verde River's baseflow comes from the Big Chino.

At the urging of Supervisor Chip Davis, at least four Yavapai County supervisors recently expressed support for paying only 50 percent of the county's dues this year and putting an end to the water group the following year.

But they agreed to Supervisor Tom Thurman's suggestion to hear from other water group members before making a decision. All the county's municipalities and tribes are members. All the supervisors except Rowle Simmons attended Wednesday's water group meeting.

"We all believe this is a worthwhile endeavor and we get a lot of things done," said Water Advisory Committee Co-Chair John Martinez, a Sedona City Council member.

Thurman wondered what's left for the group to do, since "the information we asked for has been accomplished" and "no new subdivisions are coming in."

Supervisor Jack Smith noted that Prescott Valley alone has a 3,500-home subdivision coming. The water group is "very important, especially to people like me that seek the answers," he said. "There's a lot of entities out there that have false information."

Cottonwood Mayor Diane Joens noted that a current water committee study with the Bureau of Reclamation is not yet complete.

"We are all in one watershed, and we still have issues to look at and solve," Joens said.

When the water group conducts studies with federal agencies, its credibility comes from the fact that it's a cooperative effort between the county and all its municipalities, Clarkdale Mayor Doug Von Gausig said.

"The Water Advisory Committee is the only one that's different, and I think that has huge value," Von Gausig said. "There isn't any other forum where (these) communities get together that I know of."

The Bureau of Reclamation study builds on previous water committee studies that analyzed how much groundwater is available in the region and where it is located. The first part of the Bureau of Reclamation study concluded this region needs another 45,000 acre-feet to 80,000 acre-feet of water supplies annually from new sources by 2050. Now the water group is analyzing how to come up with that extra water.

"These are huge water problems," Von Gausig said, and they'll only get bigger.
Contact
Sign up for our e-News Alerts
Most Read
7 days
30 days