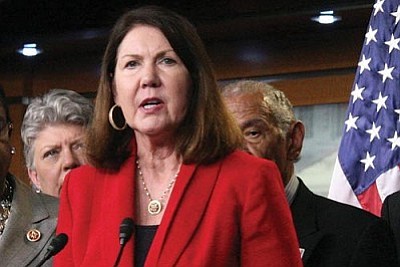 Rep. Ann Kirkpatrick, D-Flagstaff, has been raising funds and racking up endorsements in what is expected to be a hard-fought re-election bid. (Cronkite News Service photo by Michelle Peirano)

WASHINGTON - It may be too early for predictions in the competitive race for Arizona's congressional 1st District seat, but one thing is almost certain.

Democratic incumbent Ann Kirkpatrick will get at least 90 votes and Andy Tobin, one of her GOP challengers, will get at least 35. Those are the number or endorsements that each campaign is trumpeting on their websites and in a steady rain of press releases.

But do voters really care that Kirkpatrick is endorsed by a former Pinal County attorney or that three Yavapai County supervisors endorse Tobin?

The experts agree: It depends.

"In a close race you can argue that everything makes a difference," said Bill Adams, professor of public policy at George Washington University.

And the 1st District race is expected to be a close race.

The sprawling eastern Arizona district has been identified by national groups as one of the most competitive in the nation. And while Kirkpatrick, a Flagstaff Democrat, does not currently have a primary challenger, Tobin is one of three Republicans in the race, along with businessman Gary Kiehne and Rep. Adam Kwasman of Oro Valley.

Kwasman and Kiehne also have endorsements - Kwasman from some fellow state lawmakers and Kiehne from former Rep. Duncan Hunter of California - but neither touts their endorsements like Tobin and Kirkpatrick do.

"For instance, we just got the endorsement of Gov. Mitt Romney not too long ago," Handzlik said. "And with that comes a lot of support that Gov. Romney picked up when he won Arizona in 2012, including a win in our congressional district."

Endorsements from bigger names can help with fundraising, too, Handzlik said.

And endorsements can confer more than cash on a candidate, said a Kirkpatrick campaign official.

"I think what it does is it gives validity to a candidate's point of view," said D.B. Mitchell, a spokesman for Kirkpatrick's campaign.

"If you see people that you respected from your community, if you see the supervisor of the school your child goes to, if you see a former mayor that you really like endorse somebody, those things are going to matter for you," he said.

But political science experts are less enthusiastic about the impact of endorsements.

Kyle Kondik, managing editor for Larry J. Sabato's Crystal Ball at the University of Virginia Center for Politics, said endorsements probably don't matter very much. They can be a way for campaigns to get good press, but he said they probably are not meaningful unless they come from someone prominent or someone from the opposite party.

Peter Brown, assistant director of the Quinnipiac University Poll, said the effect of an endorsement varies with the candidate and the endorser.

"A well-known and well-liked endorser can help an endorsee," Brown said in an emailed statement. "But except in rare circumstances it is not a huge asset."

The campaigns can continue to pepper their websites and supporters' inboxes with news about endorsements, but in the end no one can really know how much they help a campaign.

"It's a tricky topic," Adams said. "I think the evidence is that they are sometimes pivotal, crucial and important and sometimes inconsequential and trivial."