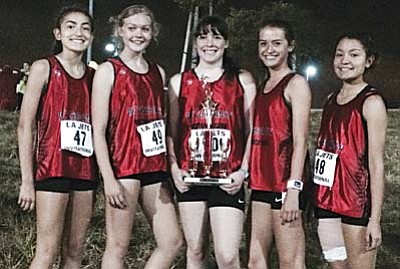 With only five athletes in the 15-16 girls division, Aftershock was able to capture the team title with 68 points, 18 points better than the 2nd place Pacific Coast Shockwaves. Photos by Tiffany Goettl.

With only five athletes in the 15-16 girls division, Aftershock was able to capture the team title with 68 points, 18 points better than the 2nd place Pacific Coast Shockwaves.

The invitational opened Friday night with the 3000-meter race. Allyson Arellano scored 10 points for the club with her 1st place finish, setting a new personal best of 10:26.63.

On the boys' side Chris D'Angelo raced his way to a 2nd place finish with a time of 9:15.95, shattering his personal best by over 25 seconds.

Saturday was a slower day as Aftershock had just two entries. One of those entries was in the 4x800m relay where the team of Karen Arellano, Megan Goettl, Penny Fenn, and Allyson Arellano took gold.

As the 2nd day of the meet came to a close, Aftershock sat in a tie for 3rd place in team scoring with 20 points, 4 points out of 1st place.

Sunday proved to be separation day as the girls of Aftershock scored big points in the 1500-meter and 800 meter events.

Chris D'Angelo also placed in the event with a 6th place finish and a new personal best of 2:10.94.

Aftershock closed the meet with one more relay victory in the 4x400. The team of Karen Arellano, Penny Fenn, Jalen Ebert, and Megan Goettl capped off the weekend with a dominant win over the Pacific Coast Shockwaves, adding to the already insurmountable lead.

The athletes of Aftershock are prepping themselves for this weekend's upcoming USATF Arizona State Championships.

At last year's meet, Allyson Arellano and Chris D'Angelo were double state champions with wins in the 1500m and 3000m while racing in the 13-14 year old division.

They will look to repeat the double this year in the 15-16 year old division.

Likewise, Penny Fenn will look to eclipse the state record in the 2000-meter steeplechase, a mark she missed by just 20 seconds last year when she was first introduced to the event.