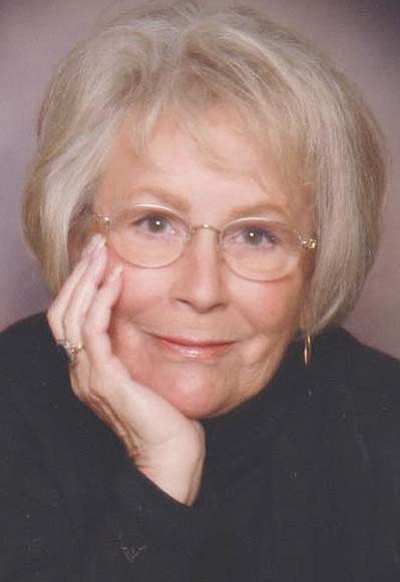 Joannie Page Gertzen, of Cottonwood, Ariz., passed away in Rocky Point, Mexico on April 29, 2014. Diagnosed with multiple sclerosis in the early 1990's, she was determined to continue living life to the fullest, with her signature gusto, courage and great style.

As the daughter of a Pan American World Airways captain, she and the family lived during her formative years in England and Bermuda, and traveled abroad extensively. These experiences nurtured her creative spirit. Naturally artistic, gifted and visionary, she created beauty wherever she lived. She had a true passion for growing flowers, cooking and entertaining; even a casual meal at her home with neighbors invariably was served with gourmet flourishes.

With great generosity of spirit, she also shopped and cooked for the less fortunate and homeless people in the Cottonwood community.

Joannie's creative vision was expressed in her professional life as a self-trained interior designer. She and her husband, Josef Gertzen, bought and refurbished an old building in downtown Denver, Colorado, across the street from Denver Union Station. They turned the five-story building into the Denver Decorative Center, or DDC. The couple traveled in Europe to find beautiful antiques that they brought back to grace their clients' homes and businesses.

After selling the DDC, the couple sought a setting where they could create the kind of place where their family would be able to vacation in a warm climate in ways that Joannie and her siblings had during her childhood.

Living for a year in Bucerias, Mexico, they then traveled the Caribbean looking for that perfect location.

While living in Old San Juan, Puerto Rico, they found property on the nearby Puerto Rican island of Culebra, and began building her dream retreat. That dream vanished after Hurricane Hugo destroyed their buildings in 1989.

She then moved to Sedona, Ariz., again hoping to build a vacation retreat. She and Joe each eventually developed disabling health problems, which required them to move from Sedona to a more manageable lifestyle in Cottonwood.

She is preceded in death by her parents, Tom and Ruth Page, and her husband Joe. She is survived by her sister, Karen Page Hastings of Oceanside, Calif.; brother Carter Page of Glenwood Springs, Colo.; her son Ian Gertzen of Phoenix, Ariz.; step-son Jason Gertzen of Prairie Village, Kan., and step-daughter Whitney Gertzen of Phoenix, and their families, including four grandchildren, as well as close friends of many years, Nanci and Michael Shapiro of Denver, Colo.

Family and friends from Cottonwood gathered in her memory on May 14, 2014.