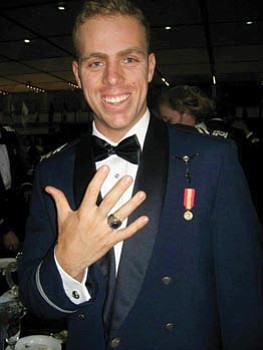 Alexander Lineberry, 21, of Cornville, a 2010 graduate of Mingus Union High School in Cottonwood, has graduated from the U.S. Air Force Academy (USAFA).

Lineberry was commissioned as a 2nd Lieutenant in the U.S. Air Force on Tuesday, May 27 . He received his degree in graduation ceremonies held on the USAFA campus in Colorado Springs, Colorado, Wednesday, May 28, where Vice President Joe Biden presented each of the 995 graduates of the class of 2014 with their degrees.

Lineberry earned a Bachelor of Science degree in physics. He is the son of Larry Lineberry of Sedona and Dr. Debbie Pardee, formerly of Cornville.

Lineberry also played on the USAFA tennis team all four years. He was a nationally ranked player throughout his junior tennis career. This year, the USAFA men's tennis team achieved an NCAA national ranking for the first time in over two decades.

While at USAFA, Lineberry earned the school's lightning bolt for athletic distinction which is top 10 percent in fitness of the entire wing (approximately 4,000 cadets) and the tennis team's 2012 Iron Bolt award for the most physically fit player on the team.

He will marry Zoe Morrison of Cottonwood, also a 2010 Mingus Union High School graduate and a 2014 graduate of Northern Arizona University, Sunday, June 1, in Sedona.