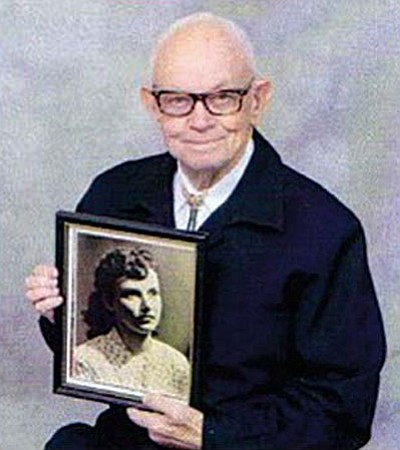 He received his Associate degree from Brooklyn College. John served his country as a corporal in the Army during the Korean War.

He was preceded in death by his wife Ruth E. McDonald; a brother Hugh McDonald and sister Mary McDonald.

Visitation was Sunday, November 9, at the Westcott Funeral Home from 3-5 PM. A Funeral Mass was Tuesday, November 10 at Immaculate Conception Catholic Church at 10 AM. Burial will be later in Prescott National Cemetery.

Ruth Elaine McDonald, 79, of Cottonwood died on Friday, December 26, 2008. She was born and lived for 60 years in Brooklyn , New York . Ruth was predeceased by her parents Nicholas and Dora Amato and her young brother Joseph.

She married John McDonald in 1950 and graced his life for 58 years. They retired to Arizona in 1989. Their retirement years have been spent in automobile and ship travel.

Ruth was a superb wife and mother, an expert cook and homemaker.

She is survived by her broken hearted husband, John and sons, John (Maree), Robert (Jenny) and daughter Kathleen (Jim), Also left behind are 5 grandchildren and 1 great-grandchild.

A memorial Mass was held on Friday, January 2, 2009 at the Immaculate Conception Catholic Church in Cottonwood, Ariz.
Report a Typo Contact
Sign up for our e-News Alerts
Most Read
7 days
30 days