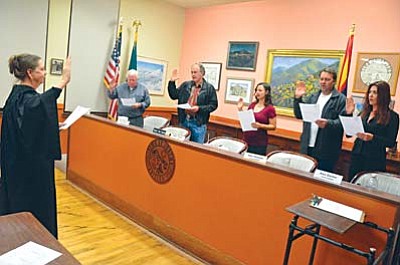 The new council appointed top-vote earner Lew Currier as mayor, who said he plans to spend the rest of the year bringing everyone up to speed. Early next year they'll start tackling trickier issues, like vacation rentals and infrastructure projects.

"It's going to be an interesting council," Currier said. "Most of them have not been on council before. They'll be newbies, as it were, and we'll see how they play their game."

Currier and outgoing council member Randall Hunt voted against Ordinance 405, a measure approved in October 2013 that created seven separate neighborhoods where one vacation rental apiece was allowed to operate.

Proposition 428 overturning the ordinance was placed on the August primary ballot through a community effort led by new Vice-Mayor Douglas Freund. Running on an anti-vacation rentals platform, he earned almost 12.5 percent of the vote.

For every yes vote for the proposition, there were three no's. An Aug. 13 forum for all 11 candidates gave them each an opportunity to take a stance, Currier said.

"We were prepared to fight to defend the present code," he said. "It's one thing to say that when you're not in office; it's another thing to see what that means and see what you're facing."

Currier said he intends to take on vacation rentals early next year, but that could change depending on what the council wants to do.

"We'll see what happens, but I personally want them to get a good dose of what we're doing before they jump off the cliff here," he said. "It's easy to start a fight; it's not very easy to end one."

Currier said in his experience, it takes about a year to learn the machinery of government.

"By then, you're winding down your first term," he said. "It's a tricky position to be in."

He said the last year or so has been a lot of negative back and forth.

"The community got split on this vacation rentals issue," he said. "My big emphasis is to try to get everybody back together, peaceful and quiet and non-controversial. That's going to be a big order."

Of the three council members who approved Ordinance 405, outgoing mayor Nikki Check is the only one who was re-elected.

"I'll certainly be sponsoring that as an agenda item in the very near future," she said. "It's probably on everyone else's list to talk about too, so we'll most likely get right back at it."

Check said it's anybody's guess whether the issue takes the form of another ordinance, or simply adds wording to the current zoning, or maybe even nothing at all.

"Now that they really have the opportunity to go for it, it'll be interesting to see the direction it goes, because it might change," she said. "I still think it could change, especially when the new councilors get versed in all that's involved."

She achieved the third-highest vote count at the primary. Wednesday night, she thanked some of the long-time members of council who will no longer be serving, like Anne Bassett.

"She's probably got the longest career on council of anybody," Check said.

Check, appointed during an Oct. 18, 2011 special session, along with Bill Phinney. The two replaced council members who'd resigned about a week and a half earlier.

She became mayor in May 2012 after being elected during the March primary. Now, she said she'll be glad to sit back and learn as a council member.

"When I started on council, that was the position I hoped to have, on the sideline so I could take everything in and mull things over instead of being front and center," she said. "It'll be good to have an opportunity to do that."

Mobile users use this link to view YouTube video