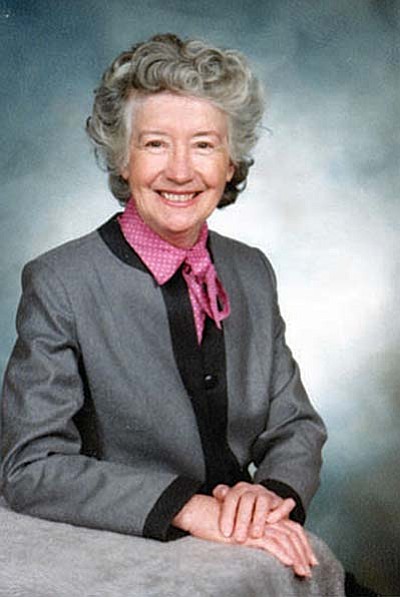 A native resident of Arizona, Mary Russell Borcherding passed away in Cottonwood on November 3, 2014.

Born on December 1, 1917, Mary Russell attended Stephen's College in Columbia, MO and graduated from the University of Arizona with a degree in Home Economics and Elementary Education.

She married William V. Borcherding in 1942 prior to him being shipped overseas with the U.S. Marines. After his return, he became an executive then longtime manager with Valley National Bank.

With his job, the family moved from Douglas to Phoenix to Ajo to Tucson, and finally Flagstaff and lived there from mid 50's to 2000. William V. was also a founder of the Flagstaff Symphony.

Mary Russell was a devoted wife and mother of three children. She is survived by daughters Lindy Roby (Preston) and Rusty Britt (Ned); 5 grandchildren and 7 great-grandchildren.

Mary Russell's remains will be buried in Flagstaff with her son and husband. Her family wishes to express their gratitude to Dee Remington and all the caregivers at Gracious Granny's for their patient, loving attention given to Mary Russell.