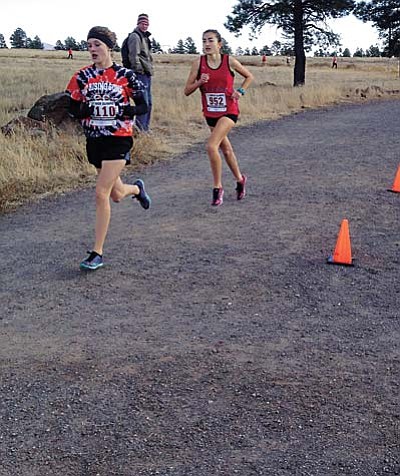 The runners of Aftershock Distance Club took to the trails of Buffalo Park in Flagstaff on Saturday, competing in the Arizona State Cross Country Championships for USA Track & Field.

Despite the elevation increase, windy conditions, and a uniquely different course, 9 of the 10 runners for the club were medalists while the 15-16 year old girls were state champions. This was the 4th state title for the team in their 5 years of existence as a club.

The 15-16 girls were led by defending state champion Allyson Arellano who used smart, tactical racing against standout runner Jesselyn Bries (The Arizona Rising Sun Track Club/O'Connor HS). Bries recently finished 5th at the AIA State Cross Country Championship for Division 1 schools, recording the fastest time in the state by any freshman. Allyson's decisive move came at the midpoint of the race. "I made my move at the top of a downhill, leading into a steep uphill. I knew I was stronger than her because she was already struggling from the wind," said Allyson. Allyson was able to use this move to break away, capturing her 2nd consecutive individual state title with a time of 19:57.3 for 5K.

Close in pursuit was Penny Fenn, who finished 2nd overall, passing Bries in the final half-mile. Penny credited Allyson with helping her. "Before the hill, I could see what was happening between her (Bries) and Ally. When I got to the top of the hill, I knew Ally had broken her, which made my job easier." At that point, Penny closed the gap and put together a strong finish to take 2nd with a time of 20:16.2.

Rounding out the group were Karen Arellano (4th), Cayley Hensley (5th), and Kayla Reilly (9th). Both Cayley and Kayla are new to the club this season. While this is the first season of competitive racing for Kayla, Cayley has loads of experience. Allyson stated, "It's nice to have fresh faces. We've known Cayley for a really long time, since our first season with Aftershock. We used to race plan against her because of how talented she is. It's great being able to race plan with her now. "

The race planning will continue as the team returns to Buffalo Park this Saturday for the Region 10 Championships. Runners and teams from New Mexico, Colorado, and the greater El Paso area will be in attendance looking to qualify for the national championships on December 13th in Myrtle Beach, South Carolina.

Other Aftershock runners looking to qualify include Josh Reilly, who was 8th in the 13-14 boys division at state. Looking ahead, Josh said, "I'd like to qualify but doesn't everybody. I need to have a stronger kick at the finish. Two guys passed me just before the finish." Also looking to punch their tickets to South Carolina are Trenton Stafford (13-14 Boys), Swayze Smith (13-14 Girls), and Kevin Alvarez (3rd in the 17-18 Boys at state).

The team will have to balance school, training, and fundraising efforts as they look to peak in December on the national stage.