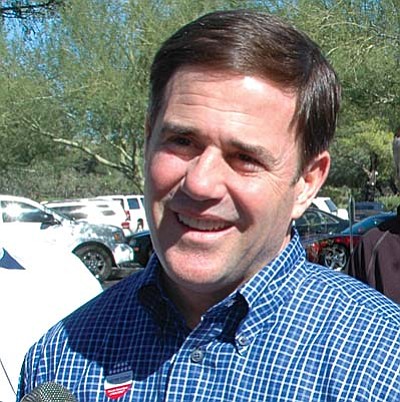 PHOENIX -- The successful gubernatorial candidate who promised to balance the budget without tax hikes or borrowing won't be presenting a truly balanced spending plan to lawmakers in January.

Doug Ducey acknowledged in an interview with Capitol Media Services that projected revenues for the new fiscal year will be less than $8.8 billion.

Meanwhile, the state is currently spending $9.3 billion annually. But the budget is considered "balanced' because the difference is being financed through accounting maneuvers, borrowing, raiding some special state funds, and tapping the last of the cash left over from the now-expired temporary one-cent sales tax hike.

On top of that, legislative budget analysts are anticipating new expenses next budget year that cannot be avoided. That will take spending next year to more than $9.4 billion.

And that doesn't even consider the additional $336 million the state may have to start paying each year to public schools to comply with a voter-approved requirement to adjust aid to match inflation.

Ducey said there are places to cut expenses. But Ducey conceded he cannot get spending down to that $8.8 billion revenue figure -- and certainly not this coming year.

"I believe over the course of an administration, we can fix our budget issues,' said Ducey who begins a four-year term as governor in January. And Ducey remains insistent, as he was during the campaign, that the state actually can generate more dollars with "kick starting' the economy so it won't be necessary to make further spending cuts.

But Ducey does not yet have a plan.

"This is going to take some time,' he said. In the interim, Ducey said his job is to figure out to use the dollars now available "to manage through the situation that we have.'

Ducey took the first step Monday, forming a seven-member committee of financial experts in the public and private sector to study the budget and make recommendations. But he made it clear up front that some things remain off the table.

Key among those is the possibility of a tax increase.

In fact, Ducey is so opposed to the idea that he even has nixed the kind of temporary tax hike pushed by incumbent Jan Brewer in 2010 after the recession sent state revenues into freefall. Brewer got voter approval by saying the alternative was much larger cuts in spending to vital state programs.

There is a way for Ducey to raise revenues without imposing new taxes.

He could simply cancel -- or delay -- a series of tax cuts lawmakers approved in prior years which have not yet taken effect. That includes $100 million worth of revenue reductions this coming fiscal year alone, mostly in tax breaks for corporations.

The new governor, however, said he won't do that, insisting it would be counterproductive.

"I talked during the campaign about making Arizona the best possible place in the nation in which to do business,' he said.

"This will make our state more competitive and a more attractive place to do business,' Ducey continued. "So we're going to phase in these tax reductions.'

There are limits, though, to what can be cut.

Funding for K-12 education, projected at $3.8 billion this coming year, is set by statutory formula. And even if the state escapes another $336 million to schools to fund a voter-mandated inflation formula -- to say nothing about the $1 billion in missed payments -- legislative budget staffers say school aid has to increase by $175 million next year.

Then there's another $57 million for the state's $1.3 billion Medicaid program, also set by law.

Those two alone take up more than half the budget.

Ducey is instead looking at more than 80 smaller agencies for places to save. But their combined budgets total only around $1 billion, the amount legislative budget staffers say could be the deficit by the 2017 fiscal year.

What that leaves is Ducey's belief that the state can grow its way out of the recession -- eventually.

"A 1 percent change, in terms of a growing economy, represents $500 million over the course of the next three years,' he said.

"If we can get the economy growing even at traditional levels, which is not where it is today, it changes our budget situation dramatically,' Ducey said. In the meantime, he said, the state needs to figure how to use the dollars Arizona does have "to manage through the situation that we have.'

Still, he's betting on the future. And he rejected any suggestion that a series of tax cuts previously adopted by the Legislature and already implemented -- more than $650 million in the last decade alone -- has left the state worse off.

"If you look at our budget over the course of time, it has grown, and our economy has grown,' Ducey said.

"We've fallen on tough times here,' he said. "But I would say to you, in many ways, much of this has worked.'

He puts much of the blame on Janet Napolitano who was governor until she quit in 2009 to take a job in the Obama administration. He said she had spending "that outpaced inflation and outpaced population growth.'

"And we have paid for that reckless behavior,' Ducey said. "So I want to get our budget structurally balanced and I want to again focus on the economy and growing that.'