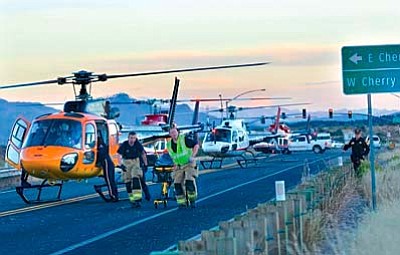 Four medical helicopters sit on Route 260 near the intersection of Cherry Creek Road at about 5 p.m. Friday in Camp Verde, transporting multiple injured people to the hospital after a two-vehicle accident which closed the highway. VVN/Vyto Starinskas

The Camp Verde Marshal's Office has released the names of the people injured in a head-on crash Friday afternoon in Camp Verde.

The driver of the mini-van is listed as Jeremy Hutchinson of Rimrock. He was transported to the Flagstaff Medical Center and is currently in ICU, according to Camp Verde Marshal's Office spokesperson Darby Martin.

Passengers in the mini-van were Sabrina Champ of Rimrock, transported to Phoenix, Current condition unknown.

Jacob Josephagin, transported, has been released.

A 12-year-old also of Rimrock was transported to Phoenix children's hospital, unknown condition.

Other children, ages of 7, 11, 15, and 16, all of Rimrock, were transported to a hospital in Phoenix, and ll have been released.

In the GMC pickup, the driver was Seth Collins, of Camp Verde, who was transported to a Phoenix hospital, and has been released.

The preliminary investigation indicates the pickup crossed the centerline on State Route 260 near the Cherry Creek Road intersection and collided head-on with the minivan.

Driver impairment is currently under investigation. Anyone having seen the driving pattern of the 2010 Grey Chevy pickup before or at the time of the accident is asked to contact the Camp Verde Marshal's Office at 928-554-8300.