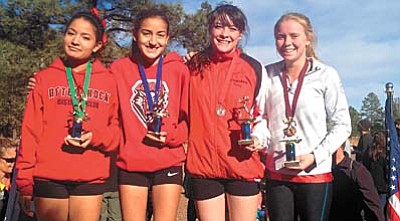 The athletes of Aftershock Distance Club made their return to Buffalo Park in Flagstaff this past weekend for the USA Track & Field Region 10 Cross Country championships. The club came away with a pair of firsts. Their first ever team regional championship and their first ever individual region champion.

The 15-16 year old girls team was again led by the duo of Allyson Arellano and Penny Fenn who were able to repeat their state finishes of 1st and 2nd place. The gap between the two was closer this time around. Arellano won the title in a time of 20:21.7 and Fenn was runner-up with a time of 20:24.9.

A different race plan was used this time around. Rather than waiting, Arellano took the lead and separated from the field about a half mile into the race. Running alone, out in front for two and half miles was difficult. "I had to make sure I stayed strong because if I let my guard down, I would have been passed," said Arellano. It wasn't the easiest race plan to execute. But stringing out the race field proved to be to the benefit of the team.

Close in pursuit of Arellano and Fenn were teammates Karen Arellano and Cayley Hensley, taking 5th and 6th respectively. Aftershock's fifth finisher, Kayla Riley, sealed the deal when she crossed the line, securing the team title over 2nd place Texas Strong, based out of El Paso. About the team victory, Karen Arellano said, "I was excited but not surprised. I knew it was possible."

The regional title came under adverse weather conditions, with high winds negating the plans used the previous weekend at the state meet. This, along with the 7,000 foot elevation and challenging course, made the race more about toughness and determination than anything.

"The wind made the course even slower than it already was," Fenn said. "The one actual fast part of the course was taken away by a headwind." The club also qualified another pair of runners for the USATF Junior Olympics in Swayze Smith (13-14 girls) and Kevin Alvarez (17-18 boys).

The team has an opportunity to fine tune a few things before heading to California on Dec.,6 for the Foot Locker West meet and South Carolina a week later for the USATF Jr Olympic Cross Country Championships.