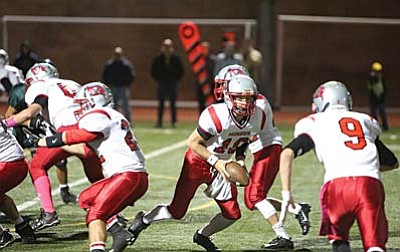 The Marauders will play their Homecoming game against Mohave next week.Photo courtesy of Taylor Mahoney/Arizona Daily Sun

FLAGSTAFF -- The Mingus Union high school football team came into Friday's game 1-4 and 0-1 in section play. The Marauders needed a win. They got just that.

However, Mingus quickly took control after a Flagstaff 3-and-out, going 59 yards in two plays to post the game's opening touchdown. After a 58-yard gain on a sweep to the left side, Mingus quarterback Jordan Upham ran it in from a yard out.

After the ensuing kickoff, Flagstaff fumbled on its first play of the drive and Mingus defensive back Taylor Thagard scooped up the loose ball for the Marauders and ran into the end zone. Mingus took a 14-0 lead with a pair of touchdowns 21 seconds apart and just 3:33 off the clock.

"It is always hard turning the ball over in a football game that's full of emotions. It is hard to stay uplifted," said head coach Robbie Rusconi. "Unfortunately we weren't able to execute our offense after that very well."

Flagstaff got its first first down of the game on the next drive after Christian Singleton hit Jaquarius Harris for an 8-yard completion and then ran for a 4-yard gain on third-and-3, but failed to extend it any further. Flagstaff found itself in another tough spot after snapping a ball over the head of punter Ben Anderson on fourth-and-7, giving Mingus the ball at the 15-yard line.

The first quarter expired with the Marauders facing a fourth-and-8 from the 13, but a fake field goal ended up in the hands of Trevor Galloway for a 13-yard touchdown catch and a 21-point lead.

Another Flagstaff 3-and-out resulted in a three-play, 67-yard drive that included runs of 35 and 27 from Orlando Machado, the later giving Mingus a 28-0 lead

The Eagles converted a third-and-10 thanks a 6-yard catch for Tyler Cullum from Singleton and a Mingus personal foul at the end of the play. However, the Marauders intercepted Christian Singleton's next pass deep in their own territory and caught a 68-yard touchdown pass two plays later.

A top performer for the Marauders was running back Javin Helsel. Helsel had a 58-yard run. He also caught a 68-yard touchdown pass.

The Eagles did respond on their next drive and ended their scoring drought as Singleton punched in a first-and-goal from the 1. The quarterback hit Cullum for a 52-yard pass to put the Eagles in the red zone. After a pair of 6-yard runs, Singleton cut the lead to 35-7 with his score.

"Both of them are sophomores, so getting some chemistry out there, it gives us something to build on," Rusconi said of Singleton and Cullum.

The Marauders tacked on another score by Galloway just before the half and entered the break up 42-7.

Mingus came out and scored on the first play of the second half before forcing Flagstaff to go 3-and-out again. The Marauders proceeded to kill most of the third quarter with a 13-play drive culminating in a 14-yard touchdown run.

Flagstaff ran just seven plays in the quarter, failing to gain positive yardage. On their final drive of the game, the Eagles put together a nine-play drive that ended with a touchdown for Nick Christopher.

Next week, The Marauders will have their homecoming game against Mohave High School.