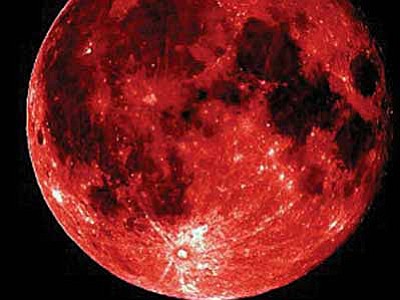 Blood moon, Act II, will open in the heavens on Wednesday morning.

And it promises to be bigger than Act I, which was in April.

The western half of the United States will have a front-row seat on a lunar eclipse that will turn the moon a burnt reddish-orange for about an hour Wednesday morning, creating the second blood moon in relatively short succession.

Because it happens right after the perigee - the closest point to Earth in the moon's orbit - this blood moon will be nearly the size of a super moon - appearing 5.3 percent larger than the previous blood moon on April 15.

It will be the second in a sequence of four - called a tetrad - that are occurring in roughly six-month intervals. The next one will appear on April 4, 2015, and the last one on September 28, 2015.

With that frequency, one might be misled into thinking that blood moons are commonplace.

There are about two lunar eclipses per year, NASA says. Some of them - penumbral eclipses - are so subtle, they are vaguely visible and go greatly unnoticed.

Other eclipses just cast a partial shadow on the moon but lend it none of that blood moon color that only total eclipses do. And they come around, on average, less than once a year.

The brilliant hue comes from the edges of the sun peeking out around the periphery of the Earth through its atmosphere in a global sunset shining on the moon, which has to be in just the right position to catch those rays.