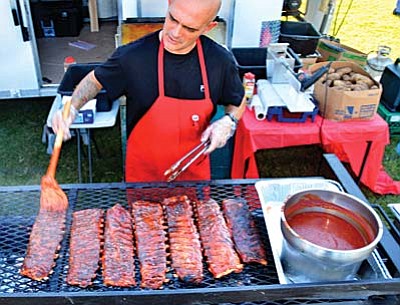 The Cottonwood City Council has "reluctantly" agreed to retire Rhythm and Ribs Music and and focus on city productions that continue to grow. They agreed to invest more into Thunder Valley Rally and the home-grown Tilted Earth Wine and Music Festival.

The council had urged the Parks and Recreation Department to set goals for its destination events and then track their success. While revenues help close the cost recovery gap for Rhythm & Ribs and the event attracted an increasing number of sponsors, Parks Dept. managers Hezekiah Allen and Richard Faust said the event continues to attract only 2,000-3,000, the same numbers drawn to the event nine years ago and doesn't bring many tourists to Cottonwood.

By comparison, during Thunder Valley Rally, all motels in Cottonwood, Camp Verde and many in Sedona were filled.

The concept for Rhythm and Ribs has been copied in Mesa and another Arizona location, Allen pointed out.

Councilman Randy Garrison said the event no longer attracts local eateries that can brag for weeks about winning. "It used to be family and community and that all went away," Garrison observed.

Faust, Director of Community Services, said "We have come to a cross roads with R&R."

The recreation officials also noted that the city and the promoter are sometimes on different pages in relation to goals. They said they have received complaints about not featuring a national act and the promoter may be more economically driven

Councilman Tim Elinski told the council that he was a little sad about "putting a lid on R&R" and concerned it would put more emphasis on TVR, which, he said, was "pretty loud." He admits that he usually leaves town during TVR since he has a home in Old Town.

Mayor Diane Joens said that there is no half-way with TVR: "You either love it or hate it, but it is good for economic development."

She said, "We need to think about the whole community."

Allen said the city would take over the entire responsibility for operation of Thunder Valley Rally, but it would join in the effort and support the Tilted Earth Festival, which last year was organized by the Page Spring Vineyards.