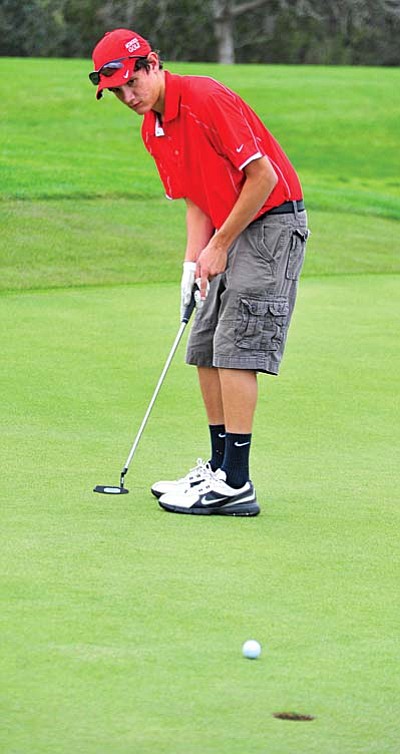 The Mingus Union High School golf team is young this year. The Marauders have no seniors. With youth comes inexperience.

The Marauders are hoping they can learn from this season. On Tuesday, Mingus had a match at Antelope Hills Golf Course in Prescott. The Marauders were one of four teams. The three other schools were Prescott High School, Bradshaw Mountain High School and Coconino High School. Mingus finished in fourth place.

Mai added he thinks his team's youth had something to do with where it placed.

"We're a young team," he said. "We're in the learning process. Our guys are getting a little more consistent. We're doing alright."

He mentioned playing on a new golf course creates some challenges.

"Just seeing a new course, not knowing exactly how it's going to play," Mai said. "How the greens are going to react. It's just kind of a little bit of everything."

On Thursday, the Marauders played a match at Kingman. It will be another new course for the team.

"I haven't even played that course," Mai said. " I have no idea what to expect."

Next Thursday, Mingus will play a home match at Verde Sante Fe Golf Course in Cornville. Then, on that Friday and Saturday the Marauders will play in a tournament at Flagstaff.

"We're winding it down," he said. "We only have about two and half weeks left."

In high school golf, teams can make the state tournament as well as individual players. Mai added that it's not likely any of the Marauders will make state this year.

For Mingus, sophomore Travis Nester played well on Tuesday. Nester scored the second lowest for the Marauders. He finished with an overall score of 49.

"I made a lot of pars, some bogeys and just had some nice strokes in there," Nester said. "I had two bad holes."

He added he still needs to work on accuracy.

"That's what is critical to our whole team," Nester said.

He said there are a few things needed for improved accuracy.

"Rhythm in our swings," he said. "And keeping our hit on the ball."

Nester said that this season his short game has been better than his long game.

"Use to be the other way around," he said.

Freshman Ethan Brogdon scored third lowest for the Mingus. Brogdon had an overall score of 52. He added he thinks he could have done better.

"Yesterday (Wednesday), altogether, as a team we just weren't feeling it," he said.

Brogdon said he feels it was just an off day for the team. He mentioned there are a few things he would like to improve on by the end of the season.

He added that fixing it is just a work in progress.