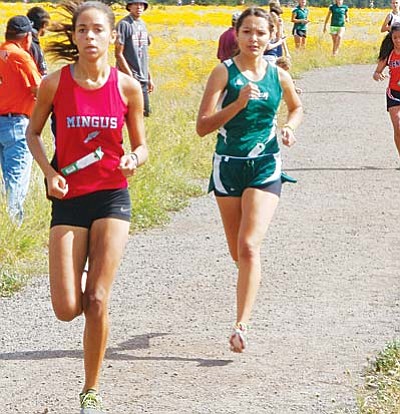 Sophomore Brianna Epperson scored for the first time for the Marauders with a fine 24:48 in 29th place. VVN/Dan Engler

TUBA CITY -- Any time you run a cross country meet in reservation country, you are assured of running against the state's best.

Such was the case Saturday when the Mingus runners tested their skills in the Bud Davis Invitational, named after the legendary Tuba City coach whose teams dominated Arizona high school cross country in the 1970s and early '80s.

The 10-team invitational, said Mingus coach Jim Bostwick, was a showcase of "many of best teams in the state in DIII and DIV; almost a preview of state championships for DIII/DIV schools." ...

If that is the case, then the Mingus girls team is looking very good as it enters the home stretch of the season. Mingus finished third overall in the team standings with 85 points, barely edging Chinle for the No. 3 team position. Page won the meet with a low score of 47 and Ganado was second with 55 points.

Most impressive for Mingus, however, was the time spread between the team's No. 1-5 runners, a 2-minute, 46-second split, which was the second best 1-5 split of all the teams in the race.

Mingus once again was led by junior Megan Goettl, who covered the sandy, hilly, 6000-foot altitude 5-kilometer course in 22:02. She was 24 seconds ahead of Mingus' No. 2 runner, junior Victoria Ducharme, who was 12th in the field of 69 runners.

Rounding out the Mingus scoring runners were junior Kelli Balensky, who ran her usual solid race in 21st place in 24:12; frosh Sydney Alexander ran another varsity quality race in 24th place in 24:34 and sophomore Brianna Epperson scored for the first time for the Marauders with a fine 24:48 in 29th place.

Mingus did not field a team in the boys varsity race. "As a result of injuries, SAT testing, fall break vacations, Homecoming leadership responsibilities, we couldn't field a boys varsity team," explained Bostwick.

Upcoming meets for the Marauders include:

"With just 4 runners racing, Aftershock didn't factor into the team scoring, but came away with a couple of stellar performances," said Swenson. "The club was led once again by 14-year-old sophomore Allyson Arellano, who covered the 3.1 mile course in a time of 18:36.7. This time was good enough to earn Allyson an 8th place finish. Junior Penny Fenn turned in her best career performance over the 5K distance with a new personal best of 19:05.5, placing her 11th in the field. Both ladies were able to finish ahead of multiple NCAA Division 1 athletes from Arizona State and Grand Canyon University.

"We really enjoy competing at the college events. It gives the athletes an opportunity to race with more seasoned runners who are older, a little stronger, and more tactically savvy in some situations. In addition to running fast times, we gain a lot of valuable experience and knowledge."

The race also included a couple of former high school standouts from the Verde Valley. Sedona Red Rock alum Mykala Seresun, turned in a 9th place finish with a time of 18:56.1, leading nationally-ranked Central Arizona. Also in the field was Mingus alum, Monica Soliz, who came across the line in 29th place (20:24.0) to lead the running club from Benedictine University.

"The ladies of Aftershock won't compete again until mid-November when they will travel to Flagstaff for the USA Track & Field Cross Country Championships," said Swenson. "Allyson Arellano will be looking to repeat as state champion while Penny Fenn will attempt to repeat her podium finish of 3rd place from 2013. The team will also look to earn their 4th state title in just 5 years of existence."

Storie covered the 4-kilometer course in 15:11 to finish second overall in the field of 62 runners. Ashley Hawks of Southern Utah University won the race in 15:09.