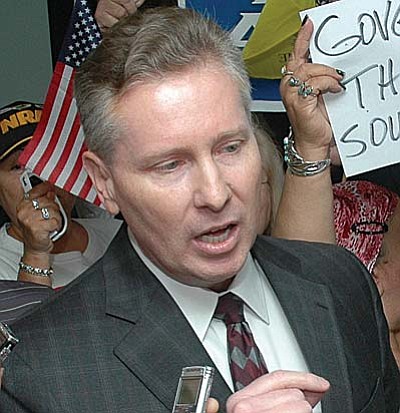 PHOENIX -- Calling it a violation of constitutional rights, a federal appeals court on Wednesday voided a 2006 voter-approved measure which denied bail to those not in the country legally who were arrested for other crimes.

Writing for the majority of the 11-member court, Judge Raymond Fisher said there is a presumptive right of those arrested to be released on bail. And he said the fact someone may have entered the country illegally is an entirely separate issue and irrelevant to the question.

"The Due Process Clauses of the Fifth and Fourteenth Amendments protect every person within the nation's borders from deprivation of life, liberty or property without due process of law,' he wrote. "Even one whose presence in this country is unlawful ... is entitled to that constitutional protection.'

And Fisher said that, regardless of someone's status, there are "profound effects' of pretrial detention, endangering someone's job, interrupting income and impairing family relationships. He also said it can affect someone's ability to assist an attorney in preparing a defense.

Maricopa County Attorney Bill Montgomery said he is studying the ruling. But he said the way it was argued in trial court by Andrew Thomas, his predecessor, may make it virtually impossible to convince the U.S. Supreme Court to overturn the decision.

Proposition 100 makes bail unavailable to those charged with "serious felony offenses' if they are in this country illegally and if "the proof is evident or the presumption great' that the person is guilty of the offense charged.

It was crafted by former state Senate President Russell Pearce -- at the time a state representative -- who argued that anyone who has crossed the border illegally probably has few ties to this country. That, he said, automatically makes them at greater risk of fleeing before trial.

Voters approved the measure on a 3-1 ratio.

"We do not question that Arizona has a compelling interest in ensuring that persons accused of serious crimes, including undocumented immigrants, are available for trial,' Fisher wrote. But the judge said there was absolutely no evidence in the record that those in the country illegally are more likely not to show up for trial than lawful residents.

In a dissent, Judge Richard Tallman said that ignores the statements made during the 2006 campaign by Thomas, then the Maricopa County attorney, that "far too many illegal immigrants accused of serious crimes have jumped bail and slipped across the border in order to avoid justice in an Arizona courtroom.'

But Fisher said his colleague is wrong to rely on that statement, saying it's not substantiated. Anyway, he said, Thomas "is not a credible source.'

"He was disbarred in 2012 for using his office to destroy political enemies, filing malicious and unfounded criminal charges, committing perjury and engaging in a host of other crimes,' Fisher said of Thomas.

Judge Jacqueline Nguyen, in a separate opinion concurring with the majority, went even farther. She said it appears lawmakers put the issue on the ballot -- and voters approved it -- not to ensure that people remained for trial but simply to punish them for being in this country illegally in the first place.

For example, she noted that Pearce promoted the bill by saying that "all illegal aliens in this country ought to be detained, debriefed and deported.'

And Nguyen said that Pearce, in a speech on the House floor, opposed follow-up legislation designed to ease the measure a bit.

"They are here illegally, they have no business being released no (matter) what the charge in reality because they're a flight risk,' he said. "They need to be turned over to ICE.'

Pearce, now working at the Maricopa County Treasurer's Office, called the ruling "absurd.' And even in the face of Nguyen's criticism, he would not back down from his contention there is a legitimate reason for Arizona to have separate rules on bail for those without papers.

"We know that a large proportion of crime is committed by those out on bail or bond,' he said Wednesday.

"They have no business being in the country in the first place,' Pearce continued. "How can you release them back onto the street for a country they're illegally in to commit more crime?'

Pearce also called the ruling a violation of states' rights, citing approval by 78 percent of the voters.

"That a super majority virtually of every demographic,' he said.

But Fisher said that vote does not substitute for proof that Arizona had a problem with people not in this country legally skipping out.

"At most the vote shows that voters perceived a problem, not that one actually existed,' the judge wrote.

Montgomery said his own experience prosecuting felony drunk-driving cases convinces him that those not in the country legally are less likely to show up in court. But he conceded that Thomas, in mounting the initial defense of the law, never provided such data but instead sought to argue that Arizona was legally entitled to enact such a policy.

That, said Montgomery, was probably the weakest argument that could have been made. And what's worse is that it's too late in the legal process to now seek to introduce new evidence.

Montgomery said that hamstrings any ability to successfully defend the law, a factor he will consider in deciding whether it's worth the time seeking Supreme Court review.

The lack of data was only part of the reason for the 9th Circuit ruling.

Fisher said the crimes that voters said should mean bail denial to undocumented individuals goes far beyond what can be considered extremely serious.

"Instead, they encompass an exceedingly broad range of offenses, including not only serious offenses but also relatively minor ones, such as unlawful copying of a sound recording, altering a lottery ticket with intent to defraud, tamper with a computer with intent to defraud and theft of property worth between $3,000 and $4,000,' Fisher wrote.

The court also said the state constitutional amendment is flawed because it does not require prosecutors to prove that a specific defendant is a flight risk but instead lumps all undocumented individuals into a single category.

As proof, Fisher noted there were undocumented individuals who had been arrested prior to approval of Proposition 100, granted bail or released on their own recognizance, and later showed up for court hearings -- only to then be ordered into custody under the terms of Proposition 100.

And to show the illogic of the claim the measure ensures people remain for trial, Fisher pointed out the measure covers foreign citizens who have no legal right to return to their home countries.

"Conversely, Proposition 100 excludes from coverage individuals who would seem more likely to flee -- such as foreign citizens who are in this country lawfully as tourists and persons having dual citizenship,' the judge wrote.

Finally, he disputed presumption that being undocumented means few ties to the community, citing national research that found nearly 50 percent of those in this country have been in the country more than 10 years and more than 17 percent of household heads are homeowners.