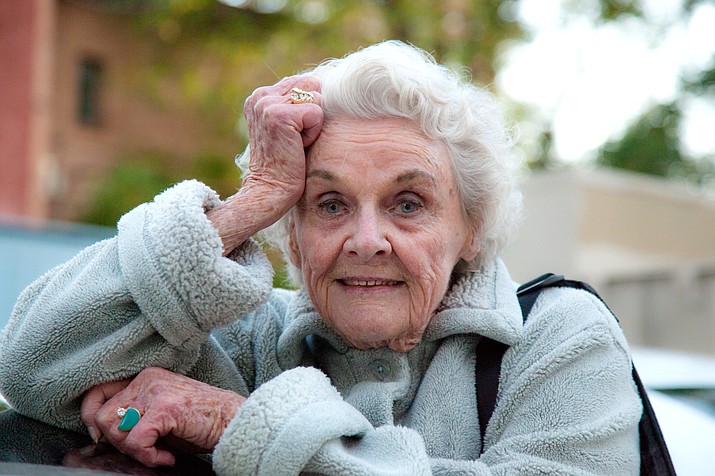 Katie Lee will be 95 on October 23. She is one of the Southwest's most outspoken and beloved environmental activists and authors. She has lived in Jerome since 1971.

Ever since Glen Canyon was buried by Reservoir Powell, Katie Lee has sung, stomped, photographed, written about, fought to let the Colorado River run free. She has inspired many to reconsider the issue of dams, particularly the 'deadbeat' dams that have become obsolete, and to consider the considerable environmental damage they have spawned. "Dam Dams" reads the license plate of her Prius.

This year marks three major milestones in Katie's very productive career. First she is one of the emotional stars of two films: "DamNation" and "Wrenched." Her latest book, The Ghosts of Dandy Crossing," was published in May by Ken Sanders' Dream Garden Press. Hance Editions in Flagstaff has just released a special edition of a dozen black and white classic portraits taken by photographer Martin D. Koehler of a nude Katie at 37 years old in the canyons of Glen Canyon that she so loved. No wonder Katie Lee is in a triple tizzy.

The Ghosts of Dandy Crossing is a triple love story: the characters that lived around Dandy Crossing, now Hite Marina, before the river rose to drown it; the love of the beauty of Glen Canyon that would soon be drowned; and Katie's love affair with a a cowboy/miner. Katie is one of the few writers I know whose words can weave us into the magic spell that the canyons of the southwest have-and this book does it very well. The book is one of the few historical documents about the life lived in Hite Canyon before the dam.

Anyone who has ever hiked or boated with Katie in the wilderness knows she will shed her clothes as quickly as she possibly can, and not put them on again until she gets close to her car. In her words, [I have been]" hiking freely and in tune with nature for at least half of those years. When I met Glen Canyon it was love at first sight- a place far from the inbred taboos of our society- closer to a dreamland than to reality. I have never posed as a model and am not doing so here...only doing what I always did in Glen Canyon- climbing, dancing, walking, touching, talking to the stone, swimming in the river, lying in the shallows, sliding down the falls, crawling through ruins, inching up crevasses, hanging from tree limbs, covering myself with mud, playing, singing, living with the canyon. I can always tell when a model is photographed in a place she's never seen or experienced before; it's in body language that can't be hidden."

The limited edition of black and white portraits of Katie Lee at 37 years old is now available from Hance Editions, http://katie-lee.hanceeditions.com/about-us.

The Films: "DamNation" and "Wrenched"

In 2014, two films show Katie being interviewed and singing about the loss of Glen Canyon-"Wrenched" and "DamNation."

The film "DamNation" is a documentary about America's lost and endangered rivers and the dams that block them. Producers Travis Rummel and Matt Stoecker dub Katie Lee "The Grand Dame of Dam Busting." Stoecker wrote Katie Lee a letter: "I just wanted ... to say how thankful I am to you for all you do and for being the heart and soul of our film. Every time we show it, folks come up after and are just in awe of you and teary eyed about what happened to Glen Canyon. Your description, humor, and pure joy while immersed in that beautify place is inspiring a lot of people to take up the sledgehammer and get ready for battle." www.damnationfilm.com

Producer ML Lincoln's film "Wrenched" is a gut-wrenching documentary about the community of activists that were inspired by the work of Edward Abbey, who wrote so eloquently about the lonesome and beautiful places of the Southwest. www.wrenched-themovie.com. Abbey fought with his pen to help prevent wilderness desecration from industries that care only for the money they produce. Today, profits from pollution are virtually synonymous with big business.  Katie Lee sings and talks her way right into your heart in that film. "Wrenched" was shown in Flagstaff last week and the film received a standing ovation.

Happy Birthday Katie. I'm so glad you are able to feel the effects of your eloquent activism in your lifetime. And I'm so happy to be your friend. www.katydoodit.com