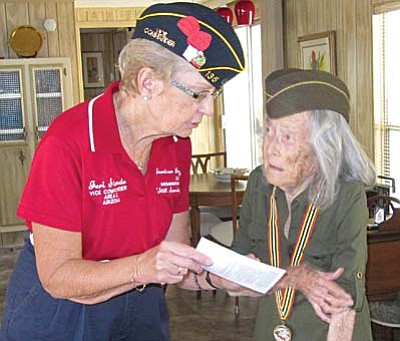 Jeri Strande (left) of the Cornville American Legion Post 135 presents post member Emma De Haven-Gleason-Berger with her travel voucher for herNov. 4-6 visit to Washington DC to visit her service-era memorial, the World War II (WWII) Monument along with other WWII veterans from across the country.

That girl is now 94-year-old Emma De Haven-Gleason-Berger, and a member of the American Legion Post 135 in Cornville. Berger was recently notified of her travel on Nov. 4-6, to Washington DC to visit her service-era memorial, the World War II (WWII) Monument along with other WWII veterans from across the country.

Berger, a young, adventurous woman and a 40-year resident of Cottonwood, originally set her "course" for the US Navy, but after a short visit in California and a long talk with her cousin, Jane, who was a women's Army recruiter, she (Berger) was convinced to join the newly appointed Women's Army Corps (WAC) instead which was originally called the Women's Army Auxiliary Corps (WAAC).

During the World War II era, approximately 400,000 U.S. women served with the armed forces and more than 460 - some sources say the figure is closer to 543 - lost their lives as a result of the war, their duties primarily consisted of medical and administrative technicians.

According to Berger, "It was December when I was there and it was cold." She went on to explain that in those days, women's uniforms did not include slacks, so sometimes it was difficult to stay warm.

Following her training, she and other WAC's were chosen as a unit to follow Gen. Dwight D. Eisenhower to Europe.

Troops boarded the Queen Elizabeth in January, 1944, (which had been converted into a troop transport), and anchored in New York Harbor. With the capability of transporting over 800 troops, plus the crew, "the ship's decks were divided with the women assigned to the top floor and the men on the rest of the ship" - "that allowed for privacy for everyone.

And, with men and women on the same ship, the concern of fraternization was never a problem, she empathically stated, there was no hanky-panky."

While at sea, one memory that Berger holds fondly is the times that all the troops spent singing the old Irving Berlin show tunes. "It was just what we did - not only did it give us a sense of home, but it helped to pass the time."

Berger was not the historical "Rosie the Riveter" who filled in at the factories working men's jobs - no, she and many other women soldiers followed the "boys" as she referred to the men soldiers who were fighting the war.

"They (the boys) weren't crazy about us women being there, until they learned that we were going to handle the paperwork, then it was OK," she concluded.

Her quarters in London were referred to as "the tin can", because of the flimsy metal con-struction. She recalls one specific incident; it was night and the skies were black because of the Blitz bombing - she said the area around the "tin cans" was hit so hard that she and her friend were knocked out of bed!

From London, Berger and the other troops moved on to Paris, France; there the women were quartered in old horse stables - straw mattresses serving as their beds.

"Life in France was an experience - everything different, particularly the people," Berger recalled, but she became very ill due to the harsh living conditions and had to be hospitalized.

Around the time of President Franklin D. Roosevelt's death, in April 1945, her group had pushed on to Berlin. "What an exciting time that was" she reminisced. "We actually set-up office space in the Fuhrerbunker - Adolf Hitler's final headquarters," she explained.

She went on to describe the remnants left behind of the suicides that had taken place prior to the end of the war. One souvenir from that historical time that Berger possesses is a small piece of the infamous bunker.

With a passion and tradition for patriotism in her family she says she was driven to volunteer for WWII.

Stamping her foot, she explains that serving her country was a privilege and that every American should be proud to do it!

She advises young people to do it and get involved with what's happening in "their country," just as she did.

Berger says she has the American military in her blood, after all she says proudly, "I am a De Haven - one of the great, great grand children of Peter De Haven, owner of the Continental Powder Works and supplier of gun powder to Gen. George Washington, during the Revolutionary War."

Berger served in the Army from 1943 to 1945 in the European Theatre; after the war, she returned to California, married and raised two sons. One a Vietnam veteran, Guy Gleason, who served in the Air Force and has subsequently passed. Her other son, Gregory is a pilot and resides in Phoenix.

The Honor Flight program provides travel for the veteran at no cost, but guardian's expenses are not covered.

To learn more about Berger and other veterans go to http://www.loc.gov/vets/ Veteran History Project.

The Sedona Library completed Berger and her husband's DVD and presented it to the Library of Congress; likewise, to learn about Honor Flights go to: www.honorflight.org.