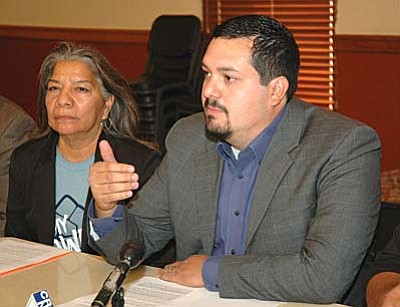 PHOENIX -- Close to one out of every seven votes cast this year will come from Hispanics, according to a non-partisan organization promoting Latino turnout.

And group members predict that large percentage of them will vote for Democrats -- but not necessarily because of what those candidates offer but how Republicans are campaigning.

Members of the One Arizona Coalition acknowledged that a new study by Pew Hispanic finds Republicans nationwide making inroads into the Hispanic community in the last four years. Asked who they would support in congressional races, 28 percent of Latinos favored a Republican, up from just 22 percent four years earlier.

But Petra Falcon, executive director of Promise Arizona, part of the coalition, said Arizona is different.

"What we've done with our voters is we've connected the dots,' she said.

That involves educating people to understand those votes translate directly into who is in power -- and how that affects their lives. Falcon said that means helping people understand whoever is elected president gets to name Supreme Court justices and the governor has veto power.

"Had we had a different kind of governor we would not have had SB 1070,' she said.

Francisco Heredia, executive director of One Arizona, said the issue goes beyond that 2010 legislation signed by Gov. Jan Brewer which as billed as helping the state combat illegal immigration. A key provision requires police to question those they have stopped if there is reason to believe they are in this country illegally, a provision Hispanics say can lead to racial profiling.

Heredia said all Latinos need to do is turn on their television and see the commercials being run by Republicans.

"They're noticing who is attacking them,' he said.

"They see commercials and radio spots about the border and all of the rhetoric around the threat coming over the border,' added former state Rep. John Loredo, a Phoenix Democrat. "It's villainizing Latinos yet again.'

Whatever the reason -- and whoever they are going to support -- the coalition reports the data predicts an increasing Hispanic voter turnout this year.

Heredia said that in 2010, the last non-presidential election, about 94,000 Latinos requested early ballots. This year, he said, the figure is more than 300,000.

But it's quite something else translating that into actual votes: Chris Brill, a data analyst for One Arizona, said he expects total Latino voter turnout this coming week to be only about 280,000.

That has led to the controversial practice by One Arizona volunteers of going door-to-door and collecting early ballots.

Republican lawmakers voted last year to outlaw the practice. But they were forced to repeal that law, which had other changes to election procedures, after foes gathered enough signatures to force the question to the ballot.

That, however, hasn't quelled opposition from key Republicans, with even Secretary of State candidate Michele Reagan saying allowing people to handle the ballots of others is ripe for fraud and there need to be limits.

But Tomas Robles, another coalition member, said the attacks on the process are without merit, as the process is "perfectly legal' as long as the envelopes are sealed and signed on the outside by the voter. And he argued that voters are not giving their ballots to strangers but people who have been active in their neighborhoods.

"The people that collect their ballots are their kids, their neighbors, their students, their sisters,' he said.

With or without ballot collections, it remains true that Hispanics still turn out at the polls in lower percentages than the community at large. But data from the coalition suggests Latino votes are becoming more important in election outcomes.

And the coalition is making claims that Hispanics made a difference in who got elected in 2012.

Loredo said Democrat Ann Kirkpatrick won her congressional race by about 9,100 votes. And about 23,900 Latinos living in the district cast ballots.

"Many of those were low-propensity voters that no one expected to come out and vote,' he said. "She won with a good Latino turnout.'

And Loredo said Democrat Ron Barber won his race in southern Arizona by 1 percent, or about 2,000 votes. He said Hispanics accounted for 13 percent of the votes cast in the district, about 39,000.

"Latino voters have flexed their electoral power where it counts,' he said.

Loredo said he can back up his claim that Latinos voted Democrat -- and made the difference in the races -- based on polling. And that goes to the contention that, whatever shift toward Republicans that may be happening among Hispanics at the national level, that's not the Arizona experience.

"The data shows that Latinos are more polarized here than they are in a lot of other places,' he said. "And the reason that they are is the constant anti-immigrant attacks against them by the Republican Party.'

Conversely, Loredo said issues like abortion do not seem to be driving Hispanics toward the GOP whose candidates traditionally have been more willing to seek to outlaw or restrict the practice. He said a survey of 1,600 voters in Arizona found no significant difference between Latinos and other groups on their attitudes on that issue or access to contraception.

"The old Republican talking point that Latinos really are Republican because of the issue of abortion and birth control and everything else is nonsense,' Loredo said.