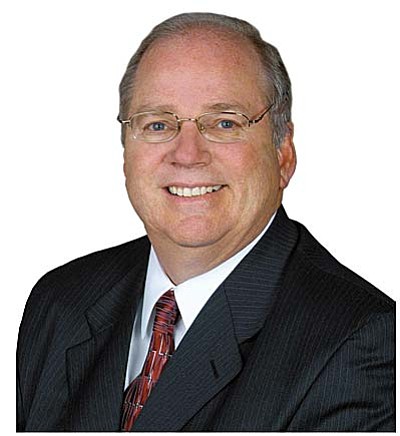 PHOENIX -- House Speaker Andy Tobin will carry the Republican banner in the race to oust Rep. Ann Kirkpatrick from Congress.

Eagar rancher Gary Kiehne conceded Tuesday afternoon, acknowledging there is no way for him to make up the more than 300-vote lead that Tobin now has in the race. Kiehne said he will back Tobin.

The move comes the same day the National Republican Congressional Committee launched the first salvo of the $1.7 million it has budgeted to try to retake the seat that has changed hands several times in the last decade.

Commercials which started airing in the Phoenix TV market show a woman -- from the neck down -- dragging a suitcase. The theme is that Kirkpatrick has been carrying Obama's "baggage' and needs to be replace.

NRCC spokesman Daniel Scarpinato put this ad buy at about $400,000, saying the commercial will run for about a week before being replaced by something else. He said the Phoenix market covers about 85 percent of CD 1's voting population, though the horseshoe-shaped district extends from Arizona's northern and eastern borders into the suburbs north of Tucson.

Kiehne campaign aide Chris Baker said his client's efforts to get nominated were hampered by the fact this was a three-way GOP primary, with state Rep. Adam Kwasman of Oro Valley also in the hunt.

"Adam was free to run,' Baker said. "But I think having Adam in the race made the course to victory more complicated for us.'

Baker acknowledged that Kiehne did try to build on one thing that differentiated him from the other two: They are elected politicians while he was campaigning as a rancher. But Baker said that positioning goes only so far.

"The reality is is most primaries, and most primary voters, make decisions based on ideology,' he said. "And Adam, given where he was as a conservative, you know, we had to share that space with him.'

During the campaign, Kiehne sought to paint the House speaker as far too liberal for the district -- and too much of a political insider.

"I don't have experience in taking lunches and free trips and tickets to ballgames," he said during a televised debate in June. That was a direct slap at Tobin for getting football tickets from a Fiesta Bowl lobbyist.

There has been no love lost from Tobin's camp, with the speaker calling on Kiehne to quit the race months ago after saying during a different debate that "99 percent of (mass shootings) have been by Democrats pulling their guns out and shooting people.' Kiehne also got in political hot water by comparing refugees from Vietnam after that war to people entering the country illegally across the nation's southern border.

Baker said Kiehne's decision to back Tobin in the race against Kirkpatrick is just what happens after a primary.

"Andy is the Republican nominee and we wish him all the best,' Baker said.

But Kiehne earlier this year expressed doubt that Tobin can win the seat for Republicans.

"I think I'm the only one here that has a snowball's chance of winning the general," Kiehne said during that June debate.

The race is expected to generate a lot of dollars from both sides given the nature of the district.

On paper, the district skews Democrat, with nearly 135,000 from that party against about 108,000 Republicans. But there also are more than 116,000 independents.

The district was represented by Rick Renzi, first elected in 2002, until Renzi stepped down in 2008 following an FBI raid on his offices that subsequently led to his indictment and conviction. That enabled Kirkpatrick, then a state lawmaker, to defeat lobbyist Sydney Hay.

But the GOP won the seat back two years later with Paul Gosar beating Kirkpatrick.

Following the decennial redistricting, Gosar opted to run in the more politically favorable CD 4, leaving it to state Sen. Jonathan Paton, R-Tucson, to carry the GOP banner. But Kirkpatrick got the seat back with a 3-point edge over Paton.