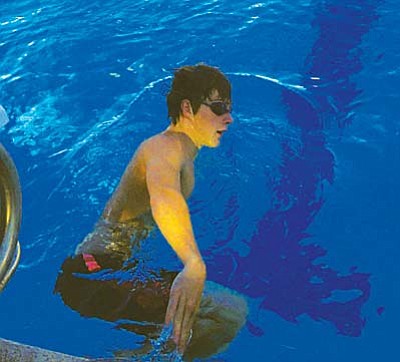 Junior Caleb Furey is hoping to have a good season.VVN/Derek Evans

COTTONWOOD -- Mingus Union High School's swim team will have its first meet on Tuesday against Flagstaff and Arete Prep. The Marauders swim all their home meets at the Cottonwood outdoor swimming pool. First-year-head coach Gretchen Wesbrock said she is excited about the season.

"These kids have been working really hard," Wesbrock said. "In fact, we had some of our kids dropping 10 seconds at the end of practice on a 100-meter freestyle. So I think we're going to see some fast swims."

She added that one of the Marauders swimmers to watch for this year is senior Leah Mount.

"Incredible swimmer, fantastic freestyler," Wesbrock said. "She can do just about everything. She's quite talented."

Wesbrock mentioned two of the top boy swimmers will be juniors Sean Williams and Caleb Furey. Williams and Furey both spent this summer as members of the Cottonwood rec swim team, the Cottonwood Clippers. She added that every swimmer still needs to work on things over the course of the season.

"I think the biggest thing overall is just building endurance," Wesbrock said. "So, for each of them, it's really fine-tuning strokes. We're working a lot on starts. A lot on underwater work. And a lot on turns. They are fast swimmers. They have a lot of things going for them. So, it's really about tweaking things."

She said she expects big things from Williams this season.

"He just has incredible get up and go," Wesbrock said. "His freestyle is pretty amazing. He has a good start. He has good turns. He's just a competitor."

She added there isn't much he needs to improve on.

"I think it's small things for him," she said. "It's about getting off the wall faster. Taking less breaths through an event. So it's little things."

"It's little things to his stroke," she said. "With him we worked a lot on underwater work with him. I think really, I've just been trying to bump up their base. So to get more endurance in them."

Wesbrock added that there is a noticeable difference in the swimmers who swam in summer compared to the others.

"Swimming is one those sports that if you're out, for even a short period of time it takes something," she said. "For the kids who were here all summer, it will be a lot easier transition."

Tuesday will be Wesbrock's first swim meet as a high school coach. But, she said she isn't nervous.

"I'm excited," she said. "They have put in the work. I'm just excited for the season to start."