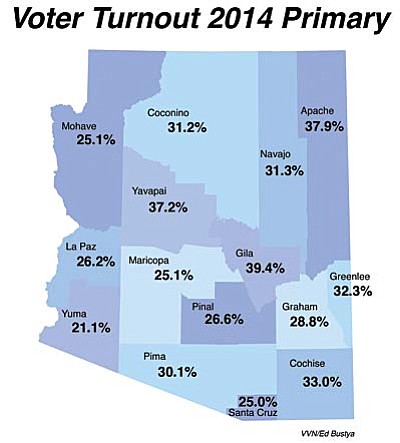 PHOENIX -- Nearly three out of four registered voters didn't bother to cast ballots for any of the primary races.

Secretary of State Ken Bennett said Monday the official tally for the Aug. 26 election shows 877,270 ballots were cast. That is out of more than 3.2 million registered voters, for a turnout of just a hair more than 27 percent.

Bennett said that's about three points less than four years ago, the last time there were statewide offices up for grabs in a non-presidential election year. And it's about one point less than 2012.

But Bennett said the results are not surprising, particularly in comparison to 2010.

He said that election featured some of the same battles as this time, including a contested Republican primary for governor. At that point, though it was Dean Martin and Buzz Mills trying to deny a full term to incumbent Jan Brewer; this time there were six contenders for the office she is vacating.

But one thing that's different, he said, is there was a high-profile race in the Republican Party for the U.S. Senate.

"Four years ago you had [incumbent John] McCain and [challenger J.D.] Hayworth duking it out,' he said, saying that race might have brought more people to the polls.

Bennett said he is still working the numbers to figure out which party's voters were more motivated.

He does know the number of ballots cast for Republican, Democrat, Libertarian and Americans Elect candidates. But Bennett does not have any information at this point about how many of those were cast not by party faithful but by independents who were allowed to vote in any of those four primaries.

As to those independents, Bennett said they seem to have stayed home despite that ability to affect those primaries.

They are the largest voting bloc, with 1.15 million listing no party preference. But Bennett is estimating their overall turnout at no more than 12 percent.

One thing Bennett does know is that there were just 21 individuals who voted only in congressional races, as that's all that was permitted them.

That is a direct result of a fight between the state, which requires proof of citizenship to register, and the federal Elections Assistance Commission, which was empowered by Congress to come up with a voter registration form that states have to honor. And that one requires only that applicants swear they are eligible to vote.

That fight is playing out in federal appeals court.

In the interim, Arizona has been allowed to enforce its proof-of-citizenship requirements for statewide, legislative and local races. But the state, at least for now, has to allow those who submit the EAC-approved form to vote in federal races.

Bennett said there are perhaps a couple of thousand individuals who registered with the federal form and never provide citizenship proof.

In formalizing the tally from the Aug. 26 vote, Bennett was forced to certify that his own gubernatorial bid came up far short: He gathered just 62,010 votes, compared to more than 200,000 for state Treasurer Doug Ducey who claimed the right to go up in November against Democrat Fred DuVal, Libertarian Barry Hess and John Mealer, the nominee for the Americans Elect Party.

Bennett said once his term ends at the end of the year he will seek employment in the private sector. He was chief executive officer of family-owned Bennett Oil Co. until 2006 and continues to serve on its board of directors.