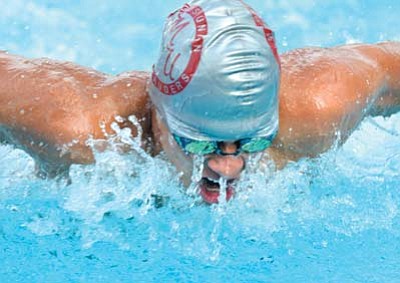 On Tuesday, the Mingus Union High School swim team had its first meet of the year. The meet was a competition featuring three teams. Mingus was the home team, as the meet was held at Cottonwood recreational center. The other two teams were Arete Preparatory Academy (Gilbert) and Flagstaff High School.

One of the top performers for Mingus boys was junior Caleb Furey. Furey finished first in 50 M freestyle, with a time 24.00. Furey said he thought he performed well.

"I think I did pretty good," he said. "It's the beginning of the season. Just starting to get into the groove of things."

Head coach Gretchen Wesbrock said Furey's goal was to beat 24.00, but just missed it. Furey said he will just need to continue to work hard to achieve his goal.

"Just need to come into practice and need to work," he said. "Work even harder than I had been doing. Need to work my turns and underwater."

Another Mingus boy swimmer who did well was junior Sean Williams. Williams placed first in both the 100 fly and 100 freestyle.

Wesbrock said she was very happy with the team's overall performance of the meet.

"I think the swimmers did fantastic," Wesbrock said. "They swam hard. I saw a lot of just commitment and hard work yesterday at our meet."

She added that she also thinks the team did well in the mental part of swimming.

"I saw some swimmers overcome those mental barriers," Wesbrock said. "Leah Mount was wonderful on the girls side. She won the 100 M breaststroke. She did a tremendous job in leading the team. Gunner Tillemans on the boys side as a freshman he came in second in the 50 freestyle."

"Flagstaff has a large team," she said. "They definitely had more swimmers. Which means, they're aren't necessarily faster, but they have more to swim. I think our kids did a tremendous job. Some swimming events they never swam before. It was a fantastic first meet experience for them."

This early in the season, Wesbrock said it's important for the swimmers not to peak too early.

On the Mingus girls side, senior Alison Bauers is hoping to have a big season.

"I was very proud of the team," Bauers said. "I thought we did really well for our first meet of the season. I was really proud of us."

She added she thought she had a good individual performance.

"I was pretty happy with myself," Bauers said.

She mentioned she would like to drop three to four seconds off her times by the end of the season. Bauers said she agrees with Wesbrock that the swimmers need to pace themselves throughout the season.

"Practices are very important," she said. "You have to try hard in practice. You have to finish your sets. If you don't, you're just cheating yourself out of progressing."