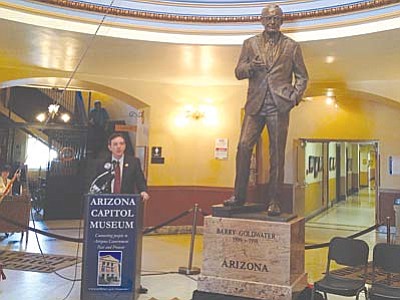 PHOENIX - With great fanfare, state officials in March unveiled an 8-foot-tall bronze statue of the late U.S. Sen. Barry M. Goldwater that will represent Arizona at the National Statuary Hall in Washington.

Months later, visitors to the old State Capitol will still see the statue looming over the state seal in the rotunda.

Those tasked with raising money to create and ship the statue say they need to raise another $65,000 or so not only to get it to Washington but also to bring home the statue it will replace. And the state lawmaker who shepherded the legislation calling for Goldwater's likeness to replace one of mining executive John Campbell Greenway said officials at the U.S. Capitol have been slow scheduling a date for the statue's unveiling.

State Librarian Joan Clark, who is part of the effort, said she has enjoyed having the statue here.

"It has been nice that the people of Arizona have been able to enjoy it since late March when we installed it," Clark said. "But now it is time for Barry Goldwater to go to D.C. and be appreciated on a national level."

Ted Hale, deputy director of the Arizona State Library, said he and others will take the next step when fundraising is complete.

"Right now we could almost afford to send him to D.C.," he said. "But we aren't anywhere near getting Mr. Greenway back."

Hale said he and others have done all they can to raise the money, including fundraisers, involving the Goldwater family and offering 2-foot replicas of the statue to those who contribute $10,000 or more, and that the effort continues.

"We haven't ruled out garage sales and swap meets either - any way we can to get him there," Hale said.

State Sen. Adam Driggs, R-Phoenix, said that while fundraising remains a challenge the main reason for the delay lies at the U.S. Capitol. Having a date for the unveiling would give the fundraising effort a boost.

"The real reason it is taking so long is waiting for the Architect of the Capitol and House Speaker Boehner to give us a date," Driggs said.

"Once we get a date, it will facilitate the last push," he added.

Laura Condeluci, a spokeswoman for the Architect of the Capitol, said via email Thursday that she couldn't respond immediately to a request for comment on Driggs' concerns.

In 2008, Driggs sponsored legislation to add Goldwater to the National Statuary Hall collection, where each state is represented by two statues. Arizona's other statue is of Father Eusebio F. Kino, the Jesuit priest who established missions during the 17th century.

He said he and others consider Goldwater a better representation of Arizona's modern history than Greenway, whose statue has stood in the hall since 1930.

Clark, the state librarian, said the total estimated cost for the project was $500,000 and that the effort is more involved that one may think.

"The money covers everything from foundry expenses to transportation including literally creating a crate to put the statue in," she said. "In D.C. there is only a limited number of rigging companies, so if you can picture the U.S. Capitol and the steps, it has to go up to get into Statuary Hall. It's quite an expensive undertaking."

By federal law none of that money can come from public funds, Clark said.

Artist Deborah Copenhaver Fellows, the creator of the Goldwater statue, said she doesn't think the average Arizonan understands this.

"I cannot tell you the number of people who have come into my studio in the last 24 months who have said, 'I met him. I remember him. He was wonderful. He is what we need now.' I mean he is just like a hero in Arizona," she said.

"I was always of the opinion that if you would let John Q Public know that he's the one that's going to send it Washington, D.C., it would work," she added. "I'm just really surprised that the fundraising wasn't more efficient."

Driggs said he looks forward to seeing the Goldwater statue in Washington.

"I can always look back on it with pride and know that a creative idea I had was successful and that Barry Goldwater - Mr. Arizona - has taken his rightful place in Statuary Hall," he said.

Bio: Born in Huntsville, Ala., in 1872, he moved to Arizona in 1910 and was influential in the development of mine, steel and railroad companies here. He helped plan and build the city of Ajo and served as a regent for the University of Arizona. Served in World War I. Left Arizona in 1925 and died in 1926 in New York City.

Some Things Named After Him: Greenway High School in Phoenix; Greenway Road in metropolitan Phoenix; and Greenway Park in Scottsdale.

Bio: Born in Phoenix in 1909 and graduated from the University of Arizona. Served in Army Air Corps during World War II and helped found the Arizona Air National Guard. Served five terms in the U.S. Senate between 1953 and 1987, interrupted by a run for president as the GOP nominee in 1964. Died in 1998 and age 89.