GOP may sue to keep independents out of primaries 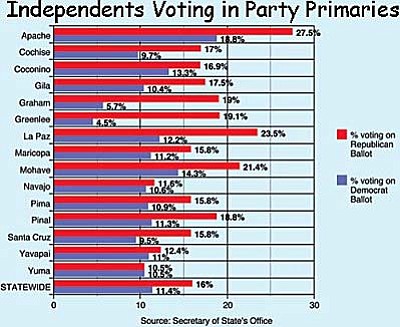 PHOENIX -- Republicans may try to block independents from participating in future party primaries after their turnout in last month's election -- close to one vote out of every seven -- may have affected some races.

A.J. LaFaro, chairman of the Maricopa County Republican Committee, said he wants the party's lawyers to find ways around the 1998 voter-approved measure which allows independents to participate in choosing the nominees of any recognized party. He said independents who may not believe in the party's "conservative values' are affecting who ultimately runs under the GOP banner.

Carolyn Cox, his Pima County counterpart, said she agrees that independents may be having an unwanted influence on GOP politics.

"I just think it's kind of unfortunate when people who are not in the party are selecting who the party is going to have as a candidate,' she said.

The state party isn't quite ready to make the push toward closing the primary -- yet.

Spokesman Tim Sifert said that has been because, until now, there weren't enough independents voting to really make a difference. But he said the party is taking a closer look at what happened last month with 16 percent of all Republican ballots cast by those not registered with the party.

"If trends are changing, we'll certainly by advocating for appropriate reforms to protect the rights of Republican voters,' he said.

One option for the GOP to shut out independents is a lawsuit, just as the Arizona Libertarian Party won a ruling a decade ago blocking independents from affecting its primary. That party, however, has since relented and now encourages independent participation.

But LaFaro said it might require actually going to the ballot in 2016 to rescind or alter the 1998 voter-approved constitutional amendment which empowered independents to affect primaries.

That proposal, if it materializes, would give voters a stark contrast in deciding how they want to choose candidates for future elections.

That's because a separate group is pushing a plan that goes totally in the other direction. It would totally eliminate partisan politics from the primary and allow all voters to choose among all contenders, regardless of party.

While independent turnout was much lower than predicted, two thirds of those who did decide to participate opted to seek Republican ballots. And that enhanced their ability to make a difference in close races.

In Maricopa County, for example, 15.8 percent of the nearly 550,000 Republican ballots cast came from independents.

LaFaro said initial analysis suggests they might have helped save the seats of some Republicans who his organization tried to defeat because of their decision to back Gov. Jan Brewer in expanding Medicaid coverage in Arizona. One of those is Rep. Heather Carter, R-Cave Creek.

According to LaFaro, 3,409 independents voted in the Republican primary in that legislative district.

In the three-way race for the two House seats, Carter's vote tally was 2,088 more than third-place finisher David Burnell Smith.

If nothing else, LaFaro said it's possible that, without the independents, Smith might have won the second seat over incumbent John Allen: Only 32 votes separated their totals.

Independent turnout might also have made the difference in the CD 1 primary where Andy Tobin edged out Gary Kiehne by just 407 votes out of more than 51,000 cast. Apache County alone had more than 1,000 independents voting in the GOP primary.

But LaFaro said the issue goes beyond the outcome of any one race.

"Independents, in my opinion, may not support the Republican platform, conservative values,' he said, meaning they may instead be supporting candidates that are "more to their liking' but less reflective of GOP positions. "If you want to vote in a Republican primary I firmly believe that you should be a registered Republican.'

That's not the assessment of D.J. Quinlan, chairman of the Arizona Democratic Party.

But there are a couple of differences.

First, with the exception of the race for school superintendent, there were no statewide Democrat primaries, meaning no choices for voters.

Second, Republicans have a problem the Democrats do not: a fairly wide schism between the more moderate business-backed Republicans and the "tea party' conservatives who have gained power within the GOP. That has resulted in some candidates actively courting independents to affect their races.

Locking out independents could raise another issue: Should taxpayers finance a Republican primary where independents, who outnumber them, cannot participate.

LaFaro said he doesn't see an issue, noting the state paid for party primaries prior to the 1998 constitutional measure. But that was back when independents made up just 10 percent of the electorate, versus more than 35 percent now.