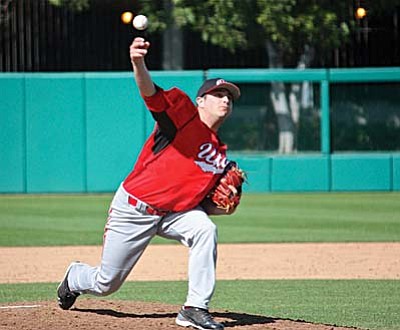 In sports, sometimes athletes are forced to wait to achieve their goals. The wait can be very long and frustrating. But, sometimes, it's worth it.

Mingus Union High School alumni Tony Vocca hopes his wait will achieve him his goal of becoming a major league baseball player. Vocca graduated Mingus in 2009. He led the Marauders to back to back state championships in baseball in 2008 and 2009. He was also the starting quarterback for Mingus football in 2007. That year, the Marauders went undefeated when until they lost the state title game to Notre Dame (Scottsdale).

"He was one of the most dedicated athletes we've ever had," said Mingus head football and baseball coach Bob Young. "I remember when he was in middle school. He would come up here before school and after school and lift weights. He put everything he had into both sports."

"There wasn't a lot either of us could say," Young said. "I don't know a lot of people who want to win more than me. He's one of them. He and I are a lot alike in that respect."

Young added that Vocca was one of the best baseball players he ever coached.

"I've been coaching baseball for over 30 years," he said. "We've had five or six kids who pitched for Mingus who went on to play professional baseball. If I had to give the ball to one kid out of all the pitchers. If I had to win one game, he'd probably be the guy I'd give the ball to."

In October, Vocca will be playing in a professional baseball league. That league will last for six months and is in Australia. Which, he hopes, will land him a spot on an MLB team.

"It's pretty much a league for guys who get sent over from an MLB organization to get some extra work in," Vocca said. "And have guys like me who are still looking to get picked up by an MLB team. Just to give us an extra chance for guys like me who have been overlooked."

Vocca added that he was recommended for this league by scouts for the Baltimore Orioles and Detroit Tigers. While he played two positions in college, he will only be a pitcher in Australia.

Since graduating Mingus, Vocca has played baseball at more than one college. For the first two years, he played at Yavapai College. Then, he transferred and played one year at the University of Utah, in the Pac 12 conference. Then, he transferred again and played his last year of NCAA eligibility at Minnesota State Mankato. In high school, he was also looked at by Georgia Tech University to play football.

"He went to Yavapai first and that was a great move," Young said. "Yavapai is a great program. Going to University of Utah, was the first year in the Pac 12. They struggled and I think he became disenchanted. Then he went to Minnesota. So I think it's hard every year when you need to go to a different place. It's hard to get established. So I think he struggled with that in college."

Vocca hasn't played baseball since the summer of 2013 when he played in an independent league in Phoenix. But, he mentioned he doesn't think the time off will be a problem.

"I'm not really rusty," he said. "I've been working out every day. I run every day. I go to the high school. I throw my bullpens there. I face some hitters. Just to keep in shape. Remember what it's like to face a hitter. I'm going to go up to my junior college and face their hitters as well. I'm in too good of shape to be rusty. My arm has felt as good as it ever has felt before. I don't think I'll have a hard time jumping back into it."

Vocca mentioned his best baseball experience so far was playing in the Pac 12.

"It's experience I'll never forget," he said. "In my opinion, playing in the best baseball conference in the country. Pretty much every day is a grind. You can't take a day off because in that conference, there isn't really a lower level team."

Vocca added he left Utah because of disagreements with the pitching coach.

But, Vocca said that he and the pitching coach are now getting along. And he was a reference for him for the Australian league.

"At the time we were butting heads," Vocca said. "We decided it would be best if we just parted ways."

Ironically, after high school, he was very close to going to a different Pac 12 university. In 2012, the University of Arizona Wildcats baseball team won the national championship. When he was a senior in high school UA head baseball coach Andy Lopez offered Vocca a scholarship to join the team. But, Lopez took it away after he wouldn't commit soon enough.

"He basically told me he was offering me a scholarship and he wanted me to commit to him right now," Vocca said. "At the time, I wasn't really sure what I wanted to do. I left and then five minutes later he called me and told me he was going to pull the scholarship offer. Basically said good luck with whatever you do."

Vocca mentioned it was hard for him seeing the Wildcats do so well in 2012.

"It was pretty frustrating," he said. "Just seeing all the success they were having. And we weren't really having a very good year at Utah. I was playing summer ball in Wisconsin when they won it. I was watching them on TV. I kept telling myself I should be out there with these guys. It's whatever, good for them. They deserved it. I was going to be a little jealous if they won it. But, I was happy for them."

Vocca said now he hopes he achieves the main goal of his whole life. That goal is joining a professional baseball team.

"Hopefully, I catch a scout's eye," he said. "Because all it takes is one scout to like what he sees."

He added he is a little nervous about moving to Australia.

"That's pretty much the farthest place you can go to from here," Vocca said. "I've been to Canada. But, other than that I haven't really been out of the country. But, at the same time I'm real excited to go out there. Not a lot of people can say they have been to Australia. Another thing is to go out there and play baseball. It's a good opportunity for me to get some more exposure. I have to remember to have fun. But, take care of business when I need to."

No matter what happens in the Australian league, Young said he is confident Vocca will find a way to stay in athletics.

He's been doing everything he can the last couple years," Young said. "I know some scouts are interested. I think this is a positive step. If he can be successful then hopefully someone will sign him."

Mingus baseball alum returns from overseas
Over time Young has proven he is more than a coach
Whatever Happened To... Jeff Huson
Jeff Huson: Sheer perseverance takes him to Majors
It's that time of year again