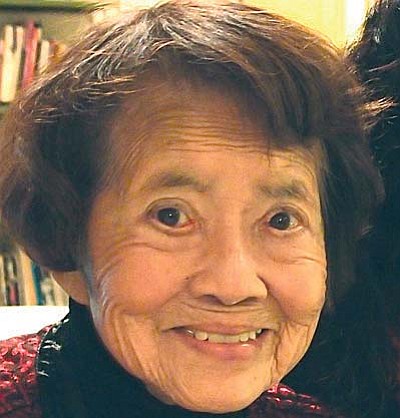 Mary Fujii Henshall, 97, Sedona resident, died peacefully at home on September 9, 2014. She was the oldest member of the Henry and Fumiko Fujii family, which numbers 77 members and 4 generations. Several years ago she wrote her own memorial, which follows.

"It was a cold stormy day in Emmett, Idaho, when I made my appearance on Dec.7, 1916. My parents came from Japan with the dream of owning their own farm. I grew up on that farm in Nampa, Idaho, and attended a two-room schoolhouse. I learned to play the piano, guitar, and to paint. After graduating from Oregon State College, where I majored in home economics, I worked as a color artist for a photographer, whose pictures were in black and white. I had to go to the back door to pick up and drop off the photographs because the photographer was afraid he would lose customers if they saw a "foreigner" coming in the front door.

"I married Paul Ban and moved to Los Angeles. My first daughter, Linda, was nine months old in 1941 when the bombs dropped on Pearl Harbor and we escaped back to the farm in Idaho. Unfortunately, my husband and his family were interned in the camps with other West Coast Japanese and we were never with the family again. After the war, I taught in the same two-room school that I attended as a child, only this time serving as principal, librarian, counselor, athletic director, janitor, furnace tender, nurse, and of course, the teacher for 12 grades. In 1948, Linda and I traveled by train and bus to Sedona, Arizona, once having to stop to let a wild herd of buffalo cross the road. Sedona was a tiny village back then and Stanley Meredith Henshall, my future husband, was the chef at the newly opened Verde Valley School.

"We wanted to be married, but Arizona did not allow inter-racial marriages so, skipping California, we drove to Utah, then Nevada, Idaho, and Oregon, but each state refused to marry us. Finally, we were allowed to marry in Walla Walla, Washington. When we returned to Sedona, Stan was fired for marrying someone from another race so we moved to Clarkdale where I taught school and Stan ran a bakery in Cottonwood. We loved Sedona so we moved back and built our home across the road from Frog Hollow, the spot on the creek beneath the current bed and breakfast on Hwy 179. This is where the Exposure's Gallery is now and you can still see the willow trees I planted. In 1951, Stan and I had a daughter, Michiko, and I also cared for my husband's young son, Thomas Meredith. Eventually Linda, Michiko and I moved to Mesa where I taught first grade, but we came back to Sedona during holidays and summer vacations.

"During this time, Stan was the caretaker for the Doodlebug Ranch, which was owned by Tony and Marguerite Staude, the builders of the Chapel of the Holy Cross. We all attended the dedication of the chapel. The Doodlebug Ranch became the Radisson Poco Diablo hotel, and the pastures became a golf course.

"After Michiko finished high school, I moved back to the Idaho farm, cared for my parents and taught at an elementary school in town until I retired. I was presented an "Outstanding Teacher of America" award in 1974. I was President of Alpha Delta Kappa (an honorary teacher's society), a charter member of Toastmistress, charter member of Nampa Civic Center Auxiliary, and a member of Delta Kappa Gamma (teacher's sorority). I taught adult and children's Sunday school and gave lectures on the Japanese. I raised Monarch butterflies in my home and took them to the area schools, showing slides, so the children could learn the life cycle of the Monarch. I wrote my parent's family history, and it was published in the Idaho Historical Society Journal in 1975.

"In 2000, I moved back to Sedona where I joined the Unitarian Universalist Fellowship Church, Retired Teachers, and University Women. I keep busy going to exercise class, helping with Meals on Wheels, and enjoyed the Gem and Mineral Club and my painting classes. Linda lives with me now and I really appreciate her. I travel to visit Michiko and her family in Washington, D.C., where I work out at the gym, take a watercolor class, and enjoy the cherry blossoms. Most recently, I've found friends and fun at the Sedona Sunrise Center for Adults where I stay during the day, always returning home to my beautiful home on Canyon Drive."