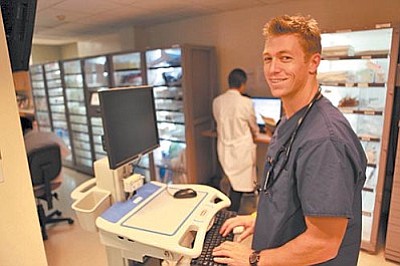 Private vendors are joining the movement to bring telemedicine to rural communities in the Verde Valley and the rest of the state.

Northern Arizona Healthcare is remotely monitoring another 200 to 250 patients in rural communities through a $129,000 USDA grant, said Director of Telehealth Gigi Sorenson.

This is the hospital's second time receiving the award. The first time, five telemedicine carts went out to remote communities. With this newest award, another seven can be deployed, as well as putting tablets in the hands of health workers on the reservation.

"Telemedicine is on a super fast trajectory with regard to not only understanding, but acceptance," Sorenson said.

The rural development grant puts telemedicine carts at six tribally governed health centers, along with one in Hilldale, Utah.

Through the grant, Flagstaff Medical Center is partnering with the Community Outreach and Patient Empowerment Project to bring a dozen tablets to reservation health representatives and nurses.

These tablets can be used for documentation, to educate patients, or open up communication from one provider to the next.

"It allows them to stay in their community to see specialists that they would normally have to drive in to town to see," she said.

Patients save money by not having to take time off work, pay for gas, or stay in a hotel to receive regular treatments and checkups.

Remote monitoring has been well established on the Yavapai-Apache Nation, she said, with devices in homes that upload to VVMC nursing staff.

Sedona Medical Center was connected to the Mayo Hospital in Scottsdale this year, and can now offer telestroke services.

Sorenson said these initiatives have been hospital-driven, based on needs that arise over time. Increasingly health providers are turning to telemedicine to both save money and serve patients.

Public and private sector groups are working to bring telemedicine services to rural areas, including the Arizona Telemedicine Program running out of the University of Arizona.

Sorenson is a public board member with that group, and attends conferences and meetings in Phoenix to continue pushing for telemedicine accessibility.

"It's a nationwide need," Sorenson said. "Alaska, Wyoming, and Montana, these are similar environments. There's becoming a national awareness for the need for telemedicine."

Dr. Ronald Weinstein is the founding director of the Arizona Telemedicine Program, a state-funded group that works to expand telemedicine to rural communities.

"What's happening in the Verde Valley now is because of the fact that the Northern Arizona Healthcare System is choosing to expand their services to the Verde Valley," he said.

Janet Major, the group's director of facilities, said Northern Arizona Healthcare is implementing innovative programs to connect its most rural patients to the hospital's services.

"From a connectivity perspective, we can't just treat people who have access to the Internet," Major said. "We can prevent people from being hospitalized."

Telemedicine groups agree billing parity on a national level is the next step toward the technology's widespread support and use.

Weinstein said Arizona legislators passed a major bill last year requiring reimbursement for services healthcare providers give patients, regardless of whether they're all in the same room.

"That's an area where a lot of progress is being made," he said.

Sorenson said a parity bill is also being introduced to Congress, and would initiate a multi-year rollout of new telemedicine billing standards.

"This will give financial credibility and teeth to telemedicine with regard to where it's used and how it's billed for," she said.

The Arizona Telemedicine Program got its first funding in 1996, and has been "a slow but constant process," Weinstein said.

"One of the challenges has been to find service providers who would be interested in telemedicine," he said. "There is a growing industry of for-profit companies that are offering telemedicine services. This is something quite new."

In response to this new private sector interest, Weinstein said the Arizona Telemedicine Program is hosting the first Service Provider Showcase in Phoenix on Oct. 6 and 7.

"We want to connect rural hospitals with service providers because these are badly needed services," he said. "We want to get at the front of the curve in terms of actually getting these companies to provide services in Arizona."

The governor created the Arizona Telecommunication and Information Council as part of her economic development initiatives.

ATIC's sixth annual telehealth conference is set for Oct. 30. This event gives healthcare and technology companies a chance to network, and features an overview of telemedicine in the state from Arizona Corporation Commissioner Bob Burns.