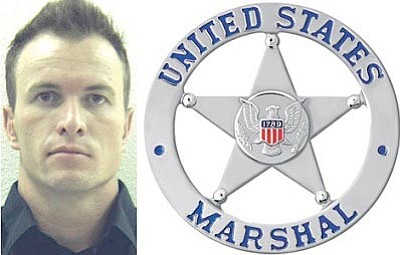 PRESCOTT - Wade C. Dickinson, who escaped from the Camp Verde jail in July, was again taken into custody Monday night in Las Vegas by U.S. Marshals and YCSO detectives.

Dickinson, 29, broke out on July 12, taking advantage of a recreation yard's broken security camera - which YCSO officials have suggested he disabled himself - and climbing onto a roof before dropping to the ground outside.

Dickinson was awaiting transfer to a state prison, where he was to serve a 24.5-year sentence after pleading guilty to two counts of fraudulent schemes and artifices, misconduct involving weapons by a prohibited possessor, possession of dangerous drugs, and trafficking in stolen property in the first degree.

Officials speaking at a Tuesday afternoon press conference made it clear that Dickinson had help from one or more people after his escape, and, although they would not be more specific, suggested that there were more arrests to come.

"He had help," David Gonzales, the U.S. Marshal for the District of Arizona, "during his two-month freedom... and we take that very seriously also."

"Those folks that helped and aided him... we intend to bring them to justice," YCSO Lt. Tom Boelts said.

Gonzales described Dickinson as "a very interesting character," who is "very adept at schemes and fooling people."

He said officials believe that, after his escape, Dickinson was in the county for about a week, was in Flagstaff for a day, and then disappeared until recently, when U.S. Marshals became confident that he was living in Las Vegas.

He was living in an "apartment near the strip," and had lost 30 pounds, Gonzales said, but, despite some initial denials, YCSO detectives and the marshals knew it was him.

Dickinson was "laying low" in a small apartment, not working, he said, although he had $1,500 cash on him when he was arrested.

Asked how investigators knew he was in Las Vegas, Gonzales would only say, "Good investigative technique," noting that they have "all kinds of methods."

The jail has seen changes since the escape, YCSO Jail Commander David Rhodes said, both structurally and in how inmates are classified.

"At the time of the escape, there were no human eyes on the rec yard," only the video camera which was disabled, Rhodes said. "There most definitely (are) now," and the cameras have been secured so they cannot be damaged from outside, he added.

Dickinson was booked into Nevada's Clark County Jail on the escape charges as well as a federal charge of unlawful flight to avoid prosecution.

It could take four to six weeks to extradite him, Gonzales said.

Tips called in by the public - and there were many - did not lead to his arrest, YCSO spokesman Dwight D'Evelyn said, and as a result the reward has been canceled.